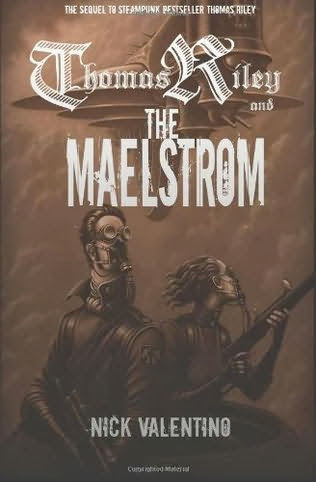 It has been over two years since I last had the pleasure of reading Nick's first book 'Thomas Riley'. Therefore, I was really looking forward to getting acquainted with the characters again and finding out was going to happen next in the story as Nick takes us back into the steampunk realm in this second eventful adventure with Thomas Riley.

After just a few pages, I found my feet really quickly with the characters and ploughed through this story like a whirlpool full of airships. It's still full of advanced steam powered technologies and fantastical science/tech weapons and gadgets that will blow your mind. It's all told in fantastic great detail, which I found very descriptive and amazingly imaginative from the delights of the airships and rampaging battles. It's fuelled by high octane action where stakes are high, it will have you gripped to the airships steering wheel on a straight course to the deadly perils ahead.

'Thomas Riley and Cynthia Basset's adventures in their steampunk world have turned down a dark path. After an assassination attempt, the West Canvian heroes receive a message from a mysterious woman about the whereabouts of Cynthia's missing suitor and famous sky pirate, Sam Burges. Cynthia insists on pursuing the lead despite great risk, so the two of them take off with a rogue colonial sky pirate and his eclectic crew to find the man that she loves. On their journey, Thomas and Cynthia learn that Sam has joined with their enemies, the Lemurians, under the supervision of the mad man, Doctor Wolfgang Gerhard. To make matters worse, Sam is in a commanding position on board the secret airship, The Maelstrom, that has the ability to control the weather in a most nefarious way. Thomas and Cynthia's loyalty to their country and to each other are laid on the line in this steampunk tale of love, loss and adventure.'

My favourite element of the story included the colonial sky pirate and the eclectic crew. The story lines connecting these characters were particularly colourful and well thought out. Each character could have easily had a greater spotlight with more explanation into their backgrounds. Perhaps these might be further expanded upon through the next story - I would be particularly interested to read more about Cale and his endeavours on the Seychelles Island.

Perhaps the only slight disappointment of this book was the ending. I have to state that this is only my opinion, and was purely based on the fact that I was hoping for it to be different and end how I wanted it to. This didn't mean that it wasn't appropriate or effective, but it just meant a slight adjustment from the way that I thought it was going to finish.

Unfortunately, this is not a book that you will come across sitting on the shelves of an ordinary bookshop. However, I do strongly recommend that you really try to get hold of a copy through either the publishing company (Zova Books) or a signed copy through the author's website. Here This is yet another fantastic epic tale that will continue to grab your imagination with full throttle. Full Steampunk ahead.....