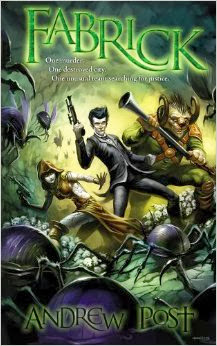 Book Cover Wars landing page is here, come and have a vote. Click the title....

Andrew Post - Fabrick - Published by  Medallion Press (November 1, 2013) Age 12+ - 544 Pages
Clyde has worked for Mr. Wilkshire for a very long time. Life is comfortable in his keeper's chateau—until Mr. Wilkshire is attacked. Clyde goes into hiding and emerges to find his only friend dead.
Brokenhearted and clueless how to bring Mr. Wilkshire's killer to justice, Clyde accepts the help of a unique group of friends, including Flam the Mouflon treasure hunter and Nevele the royal stitcher. Throughout their adventure, Clyde learns he isn't alone in this world with his magical ability: there are others like him called fabrick weavers, and for all it is both a special gift and a curse. His gift is to ease the conscience of anyone who makes a confession to him, but the curse is that the person’s luck will be reduced in proportion to the severity of the offense.
Having left his pampered life behind to set things right, Clyde joins his new friends traveling into the razed city of Geyser, into the labyrinthine world beneath, and to the palace beyond. Along the way, the group deals with an unrelenting maniac pursuer, a corrupt king, a band of pirates, a small army of guardsmen, and just a few million dog-sized bugs—all while hopefully managing to avoid jinxing their own members.
Yeah, no problem. 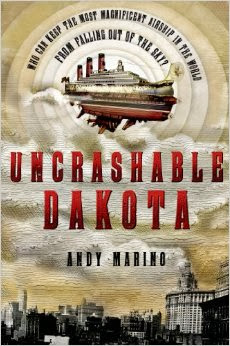 In 1862, Union army infantryman Samuel Dakota changed history when he spilled a bottle of pilfered moonshine in the Virginia dirt and stumbled upon the biochemical secret of flight. Not only did the Civil War come to a much quicker close, but Dakota Aeronautics was born.

Now, in Andy Marino's Uncrashable Dakota, it is 1912, and the titanic Dakota flagship embarks on its maiden flight. But shortly after the journey begins, the airship is hijacked. Fighting to save the ship, the young heir of the Dakota empire, Hollis, along with his brilliant friend Delia and his stepbrother, Rob, are plunged into the midst of a long-simmering family feud. Maybe Samuel’s final secret wasn’t just the tinkering of a madman after all. . . .

What sinister betrayals and strange discoveries await Hollis and his friends in the gilded corridors and opulent staterooms? Who can be trusted to keep the most magnificent airship the world has ever known from falling out of the sky? 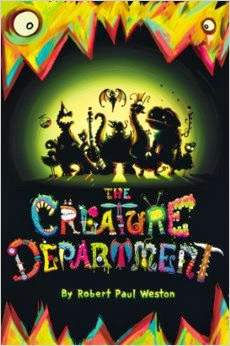 It’s a tentacled, inventive, gooey, world in there. . . .
Elliot Von Doppler and his friend Leslie think nothing ever happens in Bickleburgh, except inside the gleaming headquarters of DENKi-3000—the world’s eighth-largest electronics factory.

Beneath the glass towers and glittering skywalks, there's a rambling old mansion from which all the company’s amazing inventions spring forth. And no one except Uncle Archie knows what’s behind the second-to-last door at the end of the hall.

Until Elliot and Leslie are invited to take a glimpse inside.

They find stooped, troll-like creatures with jutting jaws and broken teeth. Tiny winged things that sparkle as they fly. And huge, hulking, hairy nonhumans (with horns). It is unlike anything they’ve ever seen.

But when Chuck Brickweather threatens to shut down the DENKi-3000 factory if a new product isn’t presented soon, the creatures know they are in danger. And when Uncle Archie vanishes, it’s up to Elliot, Leslie, and every one of the unusual, er, “employees” to create an invention so astonishing it will save the Creature Department. 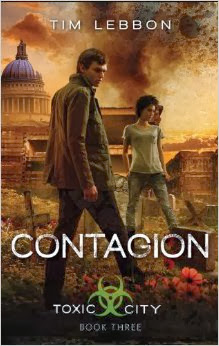 Jack and his friends are in a race against time to save the remaining inhabitants of a postapocalyptic London from a nuclear bomb.

Two years after London is struck by a devastating terrorist attack, it is cut off from the rest of the world, protected by a large force of soldiers (known as Choppers) while the rest of Britain believe that their ex-capital is a toxic, uninhabited wasteland. But that's not true. Jack and his friends know that the truth is very different--and incredible: the few remaining survivors in London are changing; developing strange, fantastic powers; evolving. And the Chopper force guarding London is treating the ruined city as its own experimental ground.

Now, Jack's powers are growing. His friend Lucy-Anne's powers are developing too, and Nomad--that mysterious woman who started it all--is close by. But the Choppers have initiated their final safeguard--a huge nuclear bomb that will wipe out London, and everyone still within its boundaries. Jack and his friends must spread the news of the bomb and save everyone they can. Before that can happen, Jack must face his father, the deadly Reaper, in their fin
By Mr Ripley's Enchanted Books on October 17, 2013