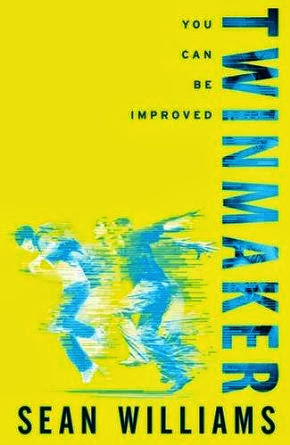 Twinmaker is the first instalment in a new trilogy that will definitely have you clambering to read the next book in the series. I have never actually read a book by this author, as a solo writer, only the books that he has collaborated with Garth Nix on. Therefore, I was very interested to read this yellow lump of a book which is over 500 pages long. The intriguing idea and the blurb on back was fascinating to me - I really wanted to see how this book would develop.

After two chapters or so the book, in my opinion, was not going too well. I found it really difficult to connect with the two main female characters. On reflection, I perhaps found them a little too overpowering. However, the further I read through the story the more things dramatically changed. More characters were brought into the mix and the whole story unfolded in an amazing way. It soon became an absolute joy to read. In fact, it got to the point where I could not put this book down. I soon found myself reading late into the night.

This book is set in a futuristic world which is strongly led by technology. It explores the themes of identity and social networking, which are both brought to a whole new level. It could be that this vision actually becomes reality in years to come. The ability to step into a booth and be instantly transported, to anyplace that you desire - even space. This fuels an amazing journey that will have you transported to Sean's imaginary world and all from the comfort of your very own armchair.

Psychologically you will find it hitting the spot for the YA audience. It asks such questions as: if you were given the chance to change something about yourself, would you? What about if it was morally wrong, would you still do it?  The character, Libby, is determined to give it a try when she gets the following message offering 'improvements". . . .

You are Special.
You are Unique.
And you have been selected.
The method is simple.
Improvement is certain.
You can change anything.

At this point, the adventure takes a fast rapid turn of events when Libby's friend, Claire, goes in search for answers. This new direction for the reader means that you will be sucked into a maelstrom and spat straight back out into an amazing futuristic world. You'll find yourself zipping from place to place in your own personal d-mat booth.

The story for me included everything that you would want and more - it has been very cleverly written and thought out. The identifiable poetry quotations add a fascinating and interesting element to the story. Whilst the complex ideas that have been woven into the fabric of the story add another dimension and texture. The characters soon became engaging, interesting and varied. This book was a fantastic surprise for me - a really cool book and a dream to read. I'm ready to crashland back to reality......

Overall verdict: buy it and try it....