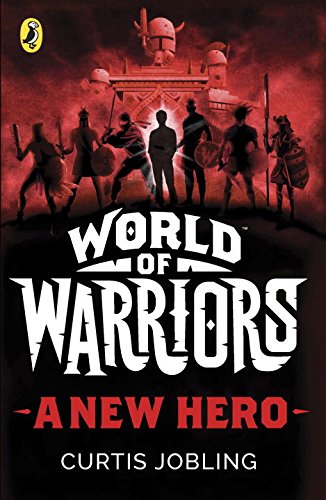 Richard 'Trick' Hope is used to getting into trouble, but not like this. . .
On the run from bullies, Trick finds himself transported to the mystical Wildlands, a place where the greatest warriors throughout history have been summoned to fight in a battle for survival - from Romans and Vikings to Knights and Samurai!
A cryptic old man tells Trick that he's there for a reason - to deliver the Wildlands from the evil Boneshaker, who rules with an army of terrifying minions. Trick has been chosen to form a band of the seven greatest warriors to defeat this terrible enemy.
As Trick begins his epic quest the stakes couldn't be higher: defeat Boneshaker or never see home again.

World of Warriors started out as a mobile adventure and combat strategy game, with the possibility of looking towards a series to complement the brilliant story behind the addictive game. Curtis Jobling is an excellent choice, in my opinion, to bring the eclectic warriors to life; he has done a fantastic job-ling.

The book is an epic tale of adventure, action and fantasy with some amazing inventiveness all swirled round. The wild imagination will get every young boy hooked from the age of nine. From the first page, this book is action packed and will hook you with many of the crazy characters. All of whom have been summoned from across time to a mysterious land called the Wildlands - a kingdom of chaos and fighting guilds who are all battling for control and power.

Some of the greatest warriors do battle in an explosive epic plot. All plucked from history, time and different cultures they will leave your imagination on overdrive. The pages will fly by quicker than Mungo drinking a jar of beer. It's a great choice of book to pick for a reluctant reader as it is pure escapism in 3D.

All the warriors have history, which is told in intermittent parts and really blends in to help cleverly build up the main story. The myths, legends and culture are all deeply rooted in our history as each character's story is based around these and facts.

This story is a quest with a big heart. It is based on hope and the fighting of tyrannical bad guys known as the evil Skull Army. It's full of great battle scenes, big oversized monsters and a bloody fighting arena with more gore and guts than your average read.

It's an easy book to follow with a cracking story at heart. Every reader will be magically transported to the Wildlands and back.... It has a great end and is a fantastic start to a new series.

I hope there are plenty more books to come.