Mr Ripley's Enchanted Books: Interview with Rhian Ivory Author of The Boy who Drew the Future‏ 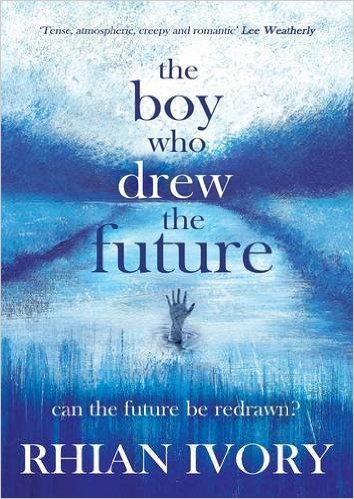 Welcome to Mr Ripley's Enchanted Books. Today, I’m very lucky to be interviewing Rhian Ivory, who is the author of The Boy who Drew the Future. This book has been published by the small Welsh publishing company Firefly Press; they have a great eye for amazing stories. Thank you Rhian for agreeing to this interview - it's wonderful to have you on the blog today.
How would you describe your book The Boy Who Drew the Future to potential readers?
Two boys living in the same village over 100 years apart suffer the same curse - the ability to draw the future. In the present day Noah tries to blend in with the crowd but when he meets Beth he is forced to face his greatest fears and look at what he's drawn, but can he work out what his drawings mean before it is too late? In 1865 Blaze is desperately trying to survive in the village by drawing people's futures in return for food and clothing, with only Dog to keep him company he tries to avoiding a return to the Workhouse. Can their futures be redrawn or will history repeat itself?
Give us an insight into the main character.
Blaze is an orphan, he lives in a hut in the gardens of the old Manor House in Sible Hedingham. He draws pictures of people's futures in return for food, shelter and clothing but there's one person's future he doesn't want to see let alone draw but Emilia just won't leave him alone. Blaze has already run away from the Workhouse once and he knows that unless he gives in to Emilia this might be where he ends up again and this time he won't be allowed to escape. Is there a message in your book?
Yes. I wanted to look at the way in which outsiders are treated in society. Both Noah and Blaze are regarded as different and decidedly other, they don't fit in, they don't look or act in the same way as everyone else but both try to hide it. Being accepted by society and the village they live in is something they both strive for whilst trying to hide away their darkest secret. Blaze is French and seen very much as a foreigner, an outcast and physically looks very different to the rest of the village and is treated accordingly, Noah however looks very much the same as everyone else but when people begin to suspect him he suffers the same treatment as Blaze back in 1865. What I found interesting as I wrote  the novel is the way in which very little has changed, of course you cannot legally 'swim' a witch in Noah's timeline as you could in Blaze's but the kind of public trial and witch hunt that both boys suffer is very similar and made me think of the way people treat one another on social media, trolls, trials and witch hunts seem frightening prevalent today as much as they did in the 1860s.
What is your favourite theme/genre to write about?
I do seem to have a bit of a thing about the future as I've written about it before in True Colours under my pen name Rhian Tracey. However as I get older I find myself being drawn to the past more than the future and I'm very interested in people who are different and how they cope in the real world, especially when their Plan A fails and they have no Plan B to fall back on. I like characters who live in the shadows, hovering on the edge of the world, they're much more interesting than those taking centre stage.
What is your least favourite part of the publishing / writing process?
The bit when I get nervous about sitting down at the computer which is where I'm at right now. I'm almost at 30,000 words in my new YA book and I know how the story ends but I don't quite know how to get there. I'm having a fight with myself, my head is in shouty caps lock mode "YOU SHOULD BE SITTING AT THE COMPUTER WRITING AT LEAST 1000 WORDS A DAY!" but my heart whispers you need to slow down, there's no rush, stop and have a think and a Cadbury's caramel, relax and watch the world go by, you'll work it out.
Eugh. I hate this bit.
What are your thoughts about how to encourage more children to read?
I'm all over it! I'm a Patron of Reading and as such my main purpose is to go into schools and encourage children to love stories, to want to listen to them, tell them, share them, draw them and write them. There's stories in everything, songs, films, newspapers, galleries, museums, eavesdropped conversations, shopping lists, poetry, plays, prose, non-fiction its all about turning up the volume on their world and letting them see the huge possibilities out there and then helping them to reach their potential. I love going into schools and helping children find their love of reading either for the first time, or helping them find it if they've lost it along the way as many of them have. Libraries play such a vital role in this, a school without a library is like a person without a heart, it is the life and soul of a school or at least it should be.

Are there any particular authors that have influenced your writing?
Yes, Roald Dahl. I've read all his books, I still have most of them, some have fallen apart and had to be replaced over the years. I re-read The Witches about once a year, that's my favourite. Seeing Roald Dahl on TV when I was younger in his shed with his paper on his knees and his pen in his hand joined up the dots for me between books and a writer. I didn't know what one was until I saw him writing in his shed. That's when I thought I want his job!
What do you like to do when you're not writing?Read. Talk about writing.
Think about writing.
Dream about writing.
I also like to make cakes with my kids and while they are cooking we do crazy dances in the kitchen. We have Slipper Dance Offs on the slippy tiles, think Strictly Come Dancing merged with Casualty. Lots of fun and narrow misses, A&E should be on speed dial on my phone.
Do you read your reviews? Do you respond to them, good or bad?
When my book first comes out I'm allowed a few weeks of being obsessed with it, reading reviews and clicking on my sales ranking but after that I make myself move on and try and get into the next book. I did say try.

What question would you liked to be asked?
I like it when people ask what my favourite word is...since you asked so nicely I'll tell you, mine is cacophony. Isn't it gorgeous?

The Boy who drew the Future, September 2015 from Firefly Press -  http://www.fireflypress.co.uk/node/161


'Secrets start to emerge as danger grows and Ivory keeps the tension high in this taut novel.'