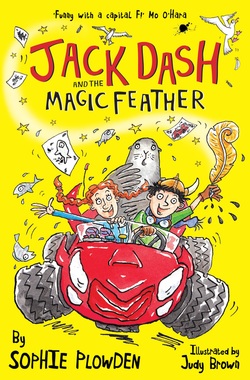 Today I'm very pleased to be interviewing Sophie Plowden who is the author of "Jack Dash and the Magic Feather". I'd like to thank her for agreeing to do this brilliant interview and for taking the time to answer a few questions for Mr Ripley's Enchanted Books. It's a great insight into the story and certainly makes me want to read it.....

Tell us a little bit about Jack Dash and the Magic Feather?
It’s about a boy who finds a feather quill pen in his bedroom in the attic of his new house. He makes a magical discovery: whatever he draws with his feather comes to life, but the only problem is, he’s not very good at drawing. By mid-morning, he’s created chaos.


Give us an insight into the main character. What does he/she do that is so special?
Jack is a loner, a fantasist and a hypochondriac, who can always be relied upon to make the wrong decision in a crisis. His speech is peppered with big words and he has no idea what they mean. I’m currently finishing the sequel, so it’s been pretty tiring living with Jack inside my head for the past couple of years, but I’m very fond of him.


How important are names to you in your books? Do you choose the names based on liking the way it sounds or the meaning? Do you have any name choosing resources you recommend?
I start with the names and the story follows. I have a collection of names, in fact, chosen entirely because of the way they sound. When I find a particularly good one, from the news, on a road sign or off the internet, I file it away in my brain. The original Jack Dash was a British communist and a trade union leader, who championed the rights of London dockers in the 1950s. The town where my story’s set is called Curtly Ambrose, after a West Indian fast bowler. I don’t know anything about cricket, but he was one of the greats, apparently.


Just as your books inspire authors, what authors have inspired you to write?
I remember discovering a battered copy of Brewer’s Dictionary of Phrase and Fable in my parents’ bookshelf when I was about nine. I had no idea what it was, but I suspected my parents of practising some sort of literary witchcraft, so I slid it off the shelf and under my duvet for a spot of illicit bedtime reading. It seemed to me to be the most extraordinary book on earth: phrases and fantasies, myths and hearsay, all carefully categorised!

P. G. Wodehouse also provided me with a master class in farce: his sparkling characters survive twists of plot as absurd and elegant as a Pythagorean equation – and all delivered with a straight face. It makes my jaw sag.

What was one of the most surprising things you learned in creating your books?
I trained as a painter and I’ve realised that painting and writing are remarkably similar. Both a painter’s style and an author’s voice run deep through the psyche. It makes the process painful at times: you have to learn your craft, but you also have to recognise your strengths and embrace them. 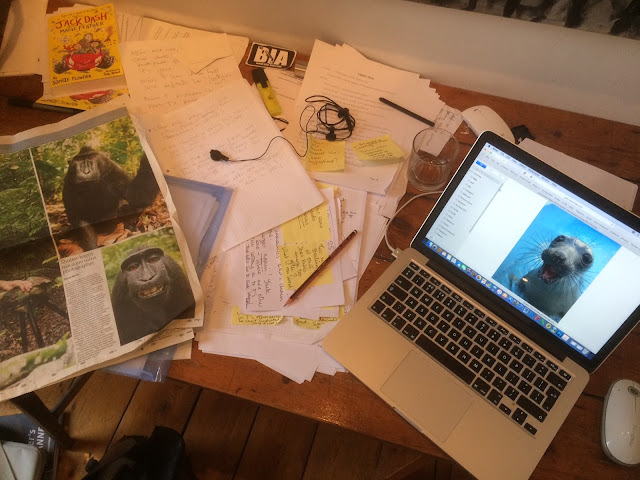 What’s the earliest memory you have of writing a story?
I clearly remember writing long and complicated stories throughout primary school, complete with illustrations and devoid of merit.


Where do you get your information or ideas for your books?
I start by creating the characters and then I deposit them in a situation that will drive the narrative. It’s often a chance remark that sparks my imagination, so I always carry a notebook in order to jot it down. (Last week, I overheard a man on the number 91 bus saying: ‘they’re no good to me now – not as feet anyway’ and I spent the rest of the journey tentatively peering under his seat.) When I’m back home, I drink coffee and pace the room, trying to build my character’s backstory. I ask a lot of personal questions: What do they keep in their fridge? How often do they change their socks? Who would they vote for in a general election? And most importantly: What are they most afraid of? When I’ve answered that one, I rub my hands together, flip my computer open and let them have it.

If you could own one item, that you don't already own now, what would it be?
Easy. A magic feather, of course. 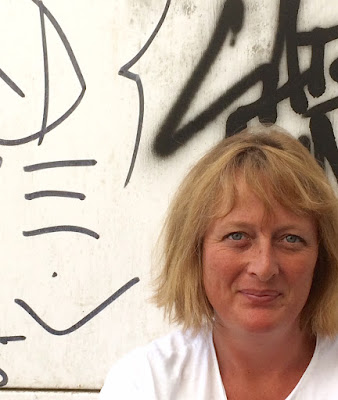