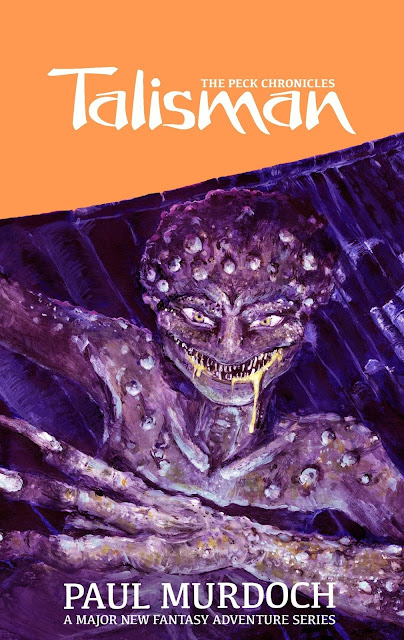 Will you be tempted by Talisman?
So, what are The Peck Chronicles? What is Talisman, book 1 in this new fantasy adventure for children, all about? And who is Paul Murdoch?
Well... The Peck family are at the core of the whole series. Cathy Peck is a very direct, no-nonsense mother who says exactly what she thinks without any regard for the consequences. She's fiery, sharp and dangerous. David Peck is a fairly boring dad, but he's missing, presumed - as far away from Cathy as possible. And then there's James Peck, our hero, a boy of ten who's head agrees with the rest of the Villagers in Drumfintley, in that they think, quite understandably, that his dad has 'done a runner'. But James's heart... His heart tells him that something very bad and deeply mysterious has happened to his father. So he is absolutely...almost...fairly sure that everybody else in Drumfintely is completely...possibly...may be wrong.
All this is tricky enough for a ten-year-old boy with asthma, but then he stumbles upon a wizard from another world, banished to Scotland in the form of a tiny goldfish. Mendel, a wizard or scientist, as he prefers to be called, is from a world called Denthan. That world is doomed, as one of its two suns is about explode and annihilate the whole planet. However, an evil Hedra wizard called Dendralon has found a way to save his own race from the holocaust at the expense of all others. Nice!
But not nice at all, really. So Mendel must get back and stop him. He must find another way to save the planet of Denthan and all the creatures who live there. But he needs a Talisman to do this, and that's where James comes in. Mendel decides to use the boy to perform his magic and he urges/blackmails James into helping him. Mendel's part of the bargain is to find out what's happened the boy's father - David Peck.
Another 'fly-in-the-ointment' is that no one knows what the Talisman looks like...not Mendel, not James, not anyone.
Is James's missing father and the destruction of Denthan linked?
Well...I'm not telling.
But I can say that there's magic, monsters, epic battles, a bad tempered mum,
and an exploding planet to deal with.
Soon, most of the villagers in Drumfintley are drawn in to one of the most amazing family adventures ever.
TALISMAN - book 1 of The Peck Chronicles is out now, published by Strident Publishing. CITADEL - Book 2 and TYRANT - Book 3 - are both coming much sooner than you think.
Ps - Paul Murdoch is just the bloke who took the movie in his head and scribbled it down as quickly as he could before it faded away for ever.
By Mr Ripley's Enchanted Books on December 07, 2015