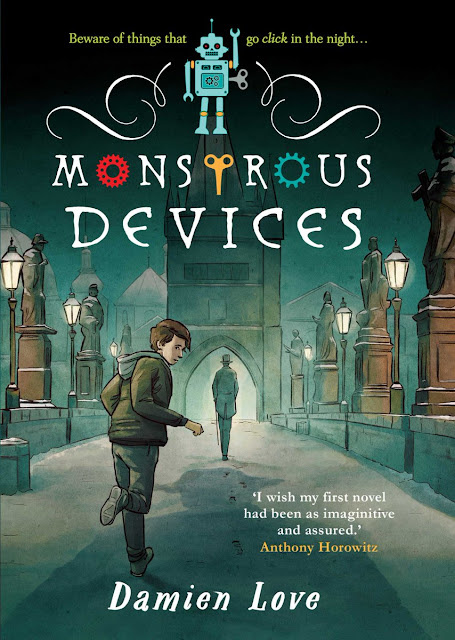 Mr. Ripley's Enchanted Books would like to welcome Glasgow-based writer, Damien Love. Damien has recently published his brilliant debut book, MONSTROUS DEVICES, which is due to be published by OneWorld Publications on the 19th March 2020.  It's a wild and wonderfully weird children's adventure. The imaginative and spooky story (featuring amazing killer robots) is highly recommended for all ages and is a real page-turner. I think this might be a book that some of you may not have come across. Therefore, it's a fantastic pleasure for us to introduce both the author and the book to you and pique your interest. We hope you enjoy the interview.

To entice potential readers to read Monstrous Devices, how would you summarise the story?
DL: Monstrous Devices is a full-on, old-school adventure story, full of mayhem and magic and…sinister stuff. It’s about a 12-year-old boy called Alex, who gets swept up into a very weird mystery after his grandfather (a somewhat elusive old gentleman) sends him a shabby old tin clockwork robot in the mail as a gift. Alex collects old toys like this, and so at first, he reckons it’s just another scratched-up antique to add to his collection. But strange things start to happen, and he quickly begins to suspect that this one is different…and possibly also deadly. Because it turns out that there are other people who are desperate to get their hands on it, too, and are prepared to go to any lengths. So, soon, Alex and his grandfather are on the run, being hunted across Europe in the snow by a strange gang, all of them trying to unlock the secret of the old toy.

There have been some connections made to Indiana Jones and Alex Rider fans enjoying the story. Do you feel these types of adventure books or films have influenced Monstrous Devices in any way?
DL: Most definitely. Alex Rider’s author, the great Anthony Horowitz was, very graciously, one of the very first people to read Monstrous Devices, before it was published, and he gave it a hugely kind quote for the cover, for which I can never thank him enough. (I should add: I don’t know him! He was just exceptionally generous.) I think that’s where the Alex Rider comparisons have come from, and I’m very glad if people think that. Although, the Alex in my book is quite a different kind of character to Alex Rider. Something like Indiana Jones was a slightly more conscious influence, the style of it – action and thrills and fun were among the things I tried to keep at the front of my mind while I was writing Monstrous Devices. And, maybe even more than that, the older films that Indiana Jones draws on itself, all those kind of cliff-hanger adventure movie serials from the 1930s and 1940s, and old detective thrillers. Hopefully, the book jumbles some of that style and pace and atmosphere up, along with some other things, into something else.

I understand (from what I have read) that you have the ability to talk to cats. What have the cats told you about the protagonist(s) in this book?
DL: Yeah. My ability to talk to cats is proving to be something of a one-way street. I can talk to them, sure enough – but I’m not sure if they understand me. But, to answer your question, I just asked them (there are two cats here right now) about the characters in the book. And as far as I can tell, one of the cats says, “Feed me.” And the other one says, “I’m asleep. I can’t hear you. I can’t hear you. Look, there’s just no point in your keeping talking to me. I’m a-sleep.” So, make of that what you will.

You've also written the sequel (The Shadow Arts). Do you have any idea when this might be published in the UK?
DL: Well, the plan was for The Shadow Arts to come out in the UK in February 2021. However, as you know, the current crisis with the coronavirus lockdown is having a huge impact on everyone’s plans, including publishers’ release schedules. Hopefully, the book will still come out around that date, but I guess, like everyone else, we’ll have to wait and see where we are and how the land lies. But I hope it will be early next year.


Do you think that the book cover plays an important part in the book-buying process? Who produced the front cover illustration for your book?
I think the cover is hugely important, especially for a book like this, and for a first-time novelist like me: my name doesn’t mean anything to anyone, no one is looking for it, so the cover is the thing that will catch the eye. And I think that the cover of Monstrous Devices really works a particular kind of magic – it draws people in, it makes them ask questions, and, even before you start reading, it begins to weave a hint of a strange, glowing, slightly ominous night time mood, and gives a sense of place. I count myself really lucky that my book is inside this cover. The artwork is by a brilliant young illustrator called Sam LeDoyen.

You can see more of his stuff here:
https://cargocollective.com/ledoyenillustration and you can follow his adventures on twitter at @abelgraymusic

What did you edit out of this book and why?
DL: Let’s see… there’s not a lot left on the cutting room floor, actually, that I can remember right now. Although, without giving anything away, there was a little scene I cut out late in the book: in Prague, where Alex and his grandfather run into members of a British stag party in the streets late at night. I try to always have a sense of reality and fantasy colliding in the story, and the reality is that Prague has become a bit of a stag-party destination in recent years, so this was kind of reflecting that. I quite liked the moment, but I finally took the scene out, really just to keep the pace up in that particular section.

As the TV critic for Scotland's The Sunday Herald, what are your favourite TV programmes and do you think they inspire you to write?
DL: Yes, I was the TV critic there for years. My own favourites, in no particular order, include, let’s see: The Sopranos, The Avengers (the 1960s TV show, not the Marvel Comics stuff), the original Twilight Zone, The Prisoner, Callan, Mad Men, Children Of The Stones, Deadwood, Danger Man, Tinker, Tailor, Soldier, Spy with Alec Guinness, The Phil Silvers Show, Spiral, the Alan Partridge saga, the 1960s Batman, and…eh…I could go on here for quite a while. And yes, for sure: while I might not necessarily draw on all of these in Monstrous Devices, I think that good writing is inspirational wherever you come across it, whether it’s in a book, in a play, on TV, in a movie or in a song lyric. And, on a more technical level, I did kind of try to write Monstrous Devices with a bit of a “camera-eye” watching the action in many places.

Do you have any strange writing habits that you would be happy to share with us?
DL: I wrote Monstrous Devices while I was working other jobs, sort of in-between other things, and so it just started to happen that a lot of it would come together while I was sitting on trains – I’d sit thinking over the plot, sometimes even working problems out on the backs of tickets or whatever scraps of paper came to hand. Then writing it up properly when I got home. But then, after a while, I got to a stage where, if I found myself stuck over something…I kind of felt that I had to get on a train to get my brain working on it. Like: I actually wouldn’t be able to figure anything out unless I was on a train, moving. So…that got a bit strange for a while.

What genre of books do you particularly like to read?
DL: I like all kinds of writing, but my favourite writers, the ones I keep coming back to, include Patricia Highsmith and Raymond Chandler, Shirley Jackson and MR James, so I do like to read thrillers, noir-like stuff (Chandler and Highsmith) and also stories tinged by the strange and supernatural, but which are still also grounded in a very solid sense of reality (Jackson and James). Hopefully, in a way, I’ve made a stab at combining elements of all this, along with some other stuff, in Monstrous Devices.