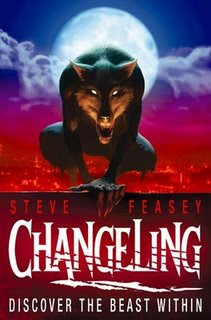 In this last week I have probably read the best debut books to be released in 2009 so far. That has made it a special week for me. So I'd like say to thank you to Michelle Harrison and Steve Feasey, for writing two such great stories.

Steve has many big acts to follow in this genre of writing. But I think he's produced a great debut book. With a fresh imaginative story encompassing Vampires, Werewolves, Demons, Djins, Sorcerers and a Serial Shopper! It is an action packed mission; lots of fire power with good pace which leaves it set for the next book. This book should appeal to Darren Shan and Dean Vincent Carter fans and indeed give them a run for their money - so watch out. I have to say that I read this book in one sitting; from cover to cover and with great pleasure. This book gets five out of five, well done Steve!!

He was born and raised on a council-estate in Hertfordshire, England. At the time he hated living there.He Say's in retrospect, I think that it gave me a good grounding in life that I may not have experienced if I had had a more privileged upbringing. There is something to be said about growing up in a tough environment.

Trey thought he was an ordinary teenager. Then he meets a mysterious stranger, Lucien Charron - luminously pale, oddly powerful, with eyes that seem flecked with fire and skin that blisters in sunlight. Somehow Trey finds himself in a luxury London penthouse, like a Bond villain's lair. It's the heart of a sinister empire, built on the powers of the netherworld - werewolves, vampires, sorcerers, and djinns. And Trey himself has a power that's roaring to break free. Is he a boy or is he a beast?

Changeling is published by Macmillan Children's Books out Jan 2 2009
By Mr Ripley's Enchanted Books on December 14, 2008

Thank you for such a fabulous review, I am so glad that you enjoyed Changeling as much as you did. Your words were extremely kind, and it's great to have received a five-out-of-five!

Thanks again, and have a wonderful Christmas.