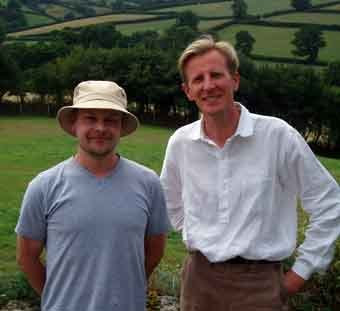 David Wyatt is a great illustrator who has worked with many 'big' authors, one of these can be seen in the photograph above. Have you worked out who it is yet? . . . . . . . Philip Reeve. It has been a privilege to have been in contact with David recently and for him to have kindly agreed to be interviewed by us. So many thanks David, for the time you spared us, we're looking forward to seeing your published graphic novel out in due time.

What project are you currently working on and are there any exciting future projects ahead? If you are allowed to divulge such information!

For the time being, I’ve gone back to doing book covers. Last year I spent most of the time working on Peter Pan in Scarlet and then Mothstorm. This year I was supposed to be doing Geraldine McCaughrean’s abridged version of the original Peter Pan, but the time constraints were such that I couldn’t do a good enough job in the time available, so I had to pass on it. At this stage I’m not sure if it will go ahead at all, but it would make a good companion to ‘Scarlet’. I would prefer to be doing these kind of projects that I can really get my teeth into, but for now it’s back to covers. At the moment I’m working on a couple of things for a New York publisher involving lots of ancient British mythology (which is interesting for me) and also a spin-off from Joe Delaney’s Spook series, which will have some interior illustrations. I’m looking forward to working on Philip Reeve’s sequel to Fever Crumb, which he is currently finishing off.

2) Obviously comic art was inspirational to you earlier on in your career, now that graphic novels are becoming popular would you consider illustrating this type of text?

It’s funny you should ask – I have been working on an idea myself. The problem is fitting it in. I’ve managed 8 finished pages since January, which means the first chapter might be completed by next Spring. It’s frustrating, as I’d like to set aside more time to work on it, so I suppose I’ll have to turn more paid work down to really make a go of it.

3) Have you come close to fulfilling your dreams as an illustrator, or are there any particular achievements or ambitions you have your heart set on for the future?

I’ve been quite lucky so far, having illustrated for many excellent authors. As mentioned earlier, I would like to do more picture books, particularly original ones where there is more collaboration between author and illustrator. I would hope to continue working with Philip, possibly on something in a similar format to Larklight, which was very satisfying to work on.

A working day in the life of David Wyatt"

This is tricky, as there is no typical day. At the moment, Spring is making the outdoors particularly attractive and I’m in a constant state of ‘catch-up’ because I’m out and about a lot enjoying the beautiful area in which I live. Some days I’m painting on the computer, some days I’m using pencils and pens, some days I’m reading manuscripts and scribbling down ideas.
I tend to get up when my body feels like it, then after a cup of tea I walk the dog. The computer is then switched on, and I have a quick look at emails before starting work. I tend to have a bike ride around midday, do a bit more work then visit the local bookshop for a coffee and a chat. I have an allotment, so somewhere during the day I’ll potter about up there for half an hour or so. Then it’s another dog walk, and after tea (unless I’m going out) I’ll keep drawing in order to make up for all the time I’ve squandered avoiding work during the day...
Posted by Mr Ripley's Enchanted Books on May 31, 2009