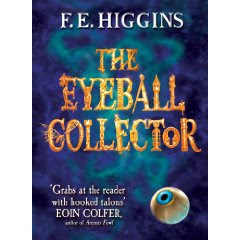 This is my favourite book, out of the series of three, so far. I love the deep and dark sophisticated world of Urbs Umida. It takes a trip in time, to another captivating Gothic tale, of one boys revenge against an evil swindler and actor of great cunning. Hector finds himself embroiled in mysterious deeds and an even sinister plot. Will Hector get his revenge or will it take on a life of its own?
Hector is out to find revenge after his father is swindled (losing everything, including his reputation) and then eventually dies. The story takes the reader on a great journey, leaving them breathless through the fast paced and intricately plotted adventure found on every page. The dark twisted characters make the book and atmosphere come alive. F E Higgins has a great way of writing this type of story. I love the butterfly theme which is intertwined in this story and the riddles that are used throughout the book. The story hooks the reader in and then spits them right back out again. Engaging them in trying to shake off the ongoing account of the inhabitants of the forbidding Gothic house of Withypitts, where the story climaxes to a great ending which fulfills the story. This is a great read for anyone who like bumps in the dark and limbs that run away with friendly cats and servants who like to be sucked dry by leeches just after supper! So I give this book five out of five as I was caught and hooked in this world and only let myself out to feed the great Hairy-Back Hog knocking on my door with a hungry look in it's eye. Tartri Flammis!

When his butterfly-collector father is swindled to within an inch of his life, a vengeful Hector leaves the city of Urbs Umida in pursuit of a fiendish villain with a glass eye. The trail leads to Withypitts Hall, a forbidding Gothic mansion as warped as its inhabitants and their secret schemes. Soon Hector finds himself embroiled in mysterious deeds more poisonous than his worst imaginings, but every twist and turn brings him closer to his revenge ...The third dark and diabolical book from a devilishly talented author.

F. E. Higgins has been fascinated by the macabre ever since seeing a ghostly apparition as a child. Nowadays F. E. travels the lands that these books describe, collecting strange artefacts and the even stranger secrets and stories behind them. The Black Book of Secrets and The Bone Magician, the first results of these eerie explorations, have sold all over the world. When not in pursuit of a story, F.E. may be found in a haunted house in Kent. She sits with quill in hand, a false leg beside her and from the mantelpiece an eyeball watches the words she forms on the page.


Other books by this author.