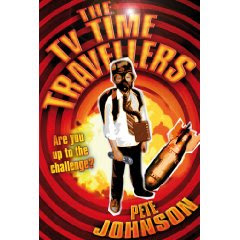 Mr Ripley's word of mouth book for June. Covers the subject of world war in a new concept for children and teachers.


This book really started in a primary school classroom, over thirty years ago.

My favourite teacher, Mr Karr, had the excellent habit of ending each day with a story. But one day, instead, he read aloud from diaries and letters of children who'd been evacuated during the
Second World War. At first I was a bit cross at not having a proper story - but soon I was absolutely riveted. I t stirred up an interest in World War II - and especially life on the home front - which has endured to this very day.

Then, a little while ago, I was chatting with a Year Five teacher who had to teach Evacuation as a topic. She was saying to me. 'It's hard to bring such a time alive to modern children because their lives are so very different with their mobile phones and wall to wall reality television.'

Now, when she said that I didn't exactly jump up and cry ' Eureka' but I tell you, I came pretty close.
And right then I began imagining a reality television show which sent modern children away to live life exactly as those evacuees did, with rationing and gas masks and very strict discipline. Yet, it would also be a 'Big Brother' style show with constant surveillance, evacuees being voted out - and a mysterious command to: 'always expect the unexpected.'

We watch the clash of two very different worlds through the eyes of five children including, Zac. Since the death of his mother, Zac has felt as if he is stuck in a horrible dark void. But his passionate interest in the war years though, has given him a secret door into another time. So the chance to live as an evacuee appears like a dream come true ...

But nothing on a reality television show is what it seems ...

Researching this book has been a special pleasure. I've loved, too, constructing a twisty plot, which asks questions about both life then and now - and I hope too, it shows the past isn't quite as faraway from us as we might think.

Zac and Izzy win a place on a new reality TV show, but they have no idea where they're going or what to expect ...They must live as if it's 1939, the start of World War Two. One by on they will be voted out by the viewing public. It's a hard life and, desperate to be the final winner, problems occur. When the live final arrives, the contestants and the audience will all be stunned by what occurs.

PETE JOHNSON began work as a film critic for Radio One, then became a teacher. His experiences in the classroom led to his beginning to write and he still keeps contact with a panel of young readers to gain the viewpoint of the actual reader as he writes new titles. He is the author of several titles for the Corgi Yearling list.