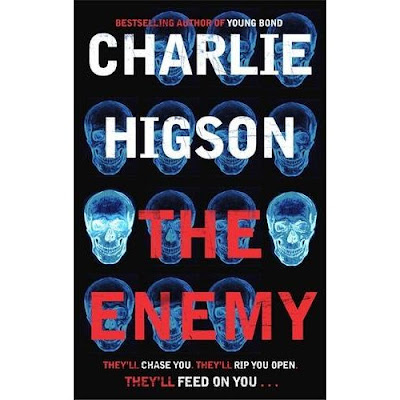 Charlie Higson is a very talented writer, not only does he write screenplays and comedy sketch shows but he's also the co-creator of The Fast Show. He writes adult thriller novels but is best known as the writer of the bestselling 'Young Bond' series. More recently, out of the blue, he has just written a great teenage horror book. It's a cross between 'Shaun of the Dead' and the quality 'gory' parts of a Stephen King book.
The book starts with an understated opening, Small Sam is playing outside like a 'normal' child but then the plot soon escalates into the 'grown-ups' taking him! After a few more pages it soon becomes clear that Small Sam is intended to be part of the menu for the Zombie-like creatures, who are adults that have been infected with a sickness. The book then follows the story, of groups of children, trying to survive in a world which is unsafe and inhabitable.
I loved the way this book draws the reader into the deep depths of a frightening and macabre world. It explores the ways in which children have to live on the edge, fighting for survival when they should've been having fun. The story contains many action scenes including stand-offs between the sick infected grown-ups versus the children.
Charlie has managed to write a heart-stopping horror book, keeping the reader on the edge of their seats with their heart in their mouths. He has played a strong emotional card, portraying key elements of death and friendship resulting in a culmination of the two. The ending is a 'cracker' resulting in the story finishing with a bang!
Let us have more of this type of writing, it's captivating and stunning. The only problem I can envisage is it getting into the hands of younger children, as parents may think it is aimed at the 'Young Bond' market. Even with an age limit of 14+, the audience needs to be carefully monitored. I will have to go now there is a "Zombie" Knocking on my door for a cup of tea so I will catch you in the next post. Five out of Five what next?

They'll chase you. They'll rip you open. They'll feed on you...When the sickness came, every parent, policeman, politician - every adult - fell ill. The lucky ones died. The others are crazed, confused and hungry. Only children under fourteen remain, and they're fighting to survive. Now there are rumours of a safe place to hide. And so a gang of children begin their quest across London, where all through the city - down alleyways, in deserted houses, underground - the grown-ups lie in wait. But can they make it there - alive?

There's now a trailer up for this at the official site: the-enemy.co.uk. Scary stuff!