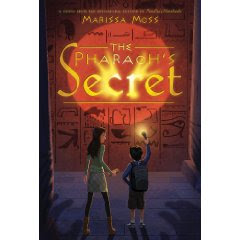 An eccentric new girl. A brooding socialite. The scion of one of New York’s wealthiest families. A promising filmmaker. As students at the exclusive Chadwick School, Phoebe, Lauren, Nick, and Patch already live in a world most teenagers only dream about.

They didn’t ask to be Society members. But when three of them receive a mysterious text message promising success and fame beyond belief, they say yes to everything. Even to the harrowing initiation ceremony in a gritty warehouse downtown, and to the ankh-shaped tattoo they’re forced to get on the nape of their necks.

Once they’re part of the Society, things begin falling into place for them. Week after week, their ambitions are fulfilled. It’s all perfect—until a body is found in Central Park with no distinguishing marks except for an ankh-shaped tattoo.

When a fortuneteller's tent appears in the market square of the city of Baltese, orphan Peter Augustus Duchene knows the questions that he needs to ask: Does his sister still live? And if so, how can he find her? The fortuneteller's mysterious answer (an elephant! An elephant will lead him there!) sets off a chain of events so remarkable, so impossible, that you will hardly dare to believe it’s true. With atmospheric illustrations by fine artist Yoko Tanaka, here is a dreamlike and captivating tale that could only be narrated by Newbery Medalist Kate DiCamillo. In this timeless fable, she evokes the largest of themes — hope and belonging, desire and compassion — with the lightness of a magician’s touch.

Filled with intrigue and surprises, The Pharaoh’s Secret includes Marissa Moss’s original illustrations throughout. The novel skillfully weaves history with a personal story full of heartache and family tensions that will entice and enthrall readers.

When Talibah and her younger brother, Adom, accompany their father, an academic, to his homeland of modern Egypt on his research assignment, they become involved in a mystery surrounding an ancient, lost pharaoh—a rare queen ruler. Someone has tried to wipe her from the record, to make it appear as if she never existed! She needs Talibah to help her and her high priest, Senenmut, reclaim their rightful place in history. Exotic locales, mysterious strangers, and a sinister archaeologist round out an adventure that is full of riddles, old tales, and, most surprisingly of all, a link to Talibah’s and Adom’s mother, who died mysteriously.

Eleven-year-old Vincent Shadow dreamed of being a toy inventor. He had notebooks full of ideas bubbles that carried sound, rockets that pop into kites, and a football that would rather bite than be caught.
Unfortunately, the secret attic lab where Vincent built his prototypes had seen more disasters than triumphs. But a chance encounter with eccentric toy inventor Howard G. Whiz, and the discovery of long-lost inventions by one of the world s greatest scientists would change Vincent s life forever.

The world is changing: the government has seized control of every aspect of society, and now, kids are disappearing. For 15-year-old Wisty and her older brother Whit, life turns upside down when they are torn from their parents one night and slammed into a secret prison for no reason they can comprehend. The New Order, as it is known, is clearly trying to suppress Life, Liberty, and the Pursuit of Being a Normal Teenager. But while trapped in this totalitarian nightmare, Wisty and Whit discover they have incredible powers they'd never dreamed of. Can this newly minted witch and wizard master their skills in time to save themselves, their parents--and maybe the world?

That's all the books in so far. If you would like to send any books to us please email us. Thank you!
Posted by Mr Ripley's Enchanted Books on June 20, 2009

Thanks for all the great "heads ups" on new books in the US this fall. Mark Teague is one of my favorite picture book authors - I had no idea he was writing a YA novel. Very exciting.