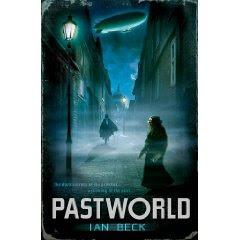 
This is a really great read,one of the best books that has used the themes of Victorian and Time travel  to good use.  A clever thriller of a book  and no end of entertainment to the reader.


Startling and original, Ian Beck’s vision of a world in which people are pawns and your future is predestined by place of birth makes compelling reading. Five out Five also being made into a Film as we speak.

Julia Eccleshare's comment:Take a thrilling journey into the past in this clever time slip mystery which, written in different voices from different times, takes its readers from a dystopian future to a Dickensian past. Caleb is on a tourist trip to the future when his father is kidnapped and he is accused of murder. Eve comes from Pastworld and knows nothing of contemporary life. From different worlds Caleb and Eve find themselves caught up in the murderer’s wicked plans and escape will not be easy.

Synopsis
Pastworld. A city within a city. A city for excursions and outings. Pastworld is a theme park with a difference, where travellers can travel back in time for a brush with an authentic Victorian past. But what if the Jack the Ripper figure stopped play-acting and really started killing people? For Caleb, a tourist from the present day, his visit goes terribly wrong when his father is kidnapped and he finds himself accused of murder. Then Caleb meets Eva Rose, a Pastworld inhabitant who has no idea the modern world exists. Both Caleb and Eva have roles to play in the murderer's diabolical plans - roles that reveal disturbing truths about their origins.
About the Author
Ian Beck is well known as an illustrator as well as more recently a writer of young fiction with the publication of the very succesful Tom Trueheart titles by OUP. This is his first foray in to the world of teen fiction. Ian lives in West London. He began his career as an illustrator working on album covers including the still in-print classic for Elton John's album Goodbye Yellow Brick Road.
Book you also may like to read are the books by Tom Becker the Darkside Series.
Darksid
1. 2010)