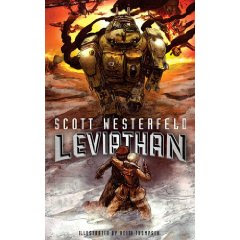 Leviathan by Scott Westerfeld is a novel of alternate history, bringing 'steampunk' to younger readers where he successfully blends the future and past incredibly well. Fact and fiction has been used cleverly throughout this book, making the story a memorable read.

The story follows the lives of Deryn and Alek. Deryn is a young woman desperate to join the Air Men of the Darwinists Army (British Empire/France). With the help of her brother, she disguises herself as a boy and joins the fight. She has excellent Air Sense, which is a must for the Darwinists, since their main type of weaponry are flying airships made of living animals, with each animal in the ecosystem playing its part. The Leviathan is an airship made up of a countless number of animals - from the smallest microscopic animal to a giant whale that contains everything. In this world, the Clanker Powers (Germany) use machines we would just about recognise today - except that lots of them have legs. The Darwinists (Britain) use DNA-fabricated animals. So the war is recast as mechanics against biotech. We have two central characters - Aleksander, son of the murdered archduke and on the run from his own Clanker people, and Deryn, a girl who's disguised as a boy in order to join the British Air Service so she could work with beasties, and who has crash landed where she shouldn't. From completely different backgrounds, they're forced to fight together against a surprisingly common enemy.

The world buildingis some the best I have read, with spectacular machinery and  a fabulous imagination  - all brought to life with wonderful Keith Thompson illustrations which add amazing depth to the journey.

The book doesn't quite end with a bang and it leaves the reading wanting answers and looking forward to the next book. I give this five out of five please can I have the next book please.

Other books you may like are Philip Reeve's - Mortal Engines and Larklight.

Book Synopsis
The year is 1914 and Europe, armed with futuristic machines and biotechnology, is on the precipice of war. Prince Aleksandar is fleeing for his life, having discovered that his parents have been assassinated and that he is now a target for the Clanker Powers, a group determined to take over the globe with their mechanical machinery. They will stop at nothing to get what they want, so Alek knows his only choice is to keep on running. When he meets Deryn Sharpe, an orphan girl who has disguised herself as a boy so she can to join the British Air Service, they form an uneasy, but necessary, alliance. But the pair will soon discover that their emerging friendship will dramatically change their lives and the entire course of the Great World War...

Scott Westerfeld is me. I’m the author of five science fiction novels for adults. I’ve also been an occasional ghost writer, which is like driving someone else’s car really, really fast for lots of money. (I could tell you what famous authors I ghost-wrote for, but then I’d have to kill you.)