These are some of the best picks due to be released in  the U.S in October. I will add more during this week.

Brandon sanderson - Published by Scholastic Press October 1, 2009
Alcatraz Versus The Knights Of Crystallia 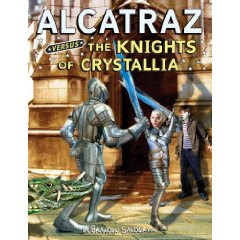 Synopsis:When Alcatraz and Grandpa Smedry make a pilgrimage to the Free Kingdom city of Crystallia, the Smedry home base, Alcatraz is shocked to see that he is, in fact, a legend. When he was a baby he was stolen by the Evil Librarians, and his mother, a Librarian herself, was behind the whole scheme. Now, with his estranged father, who is acting indeed strange, Bastille, who has been stripped of her armor, and Grandpa Smedry, who is, as always, late to everything (that's his Talent), Alcatraz tries to save a city under siege. From who? Why, the Librarians of course.