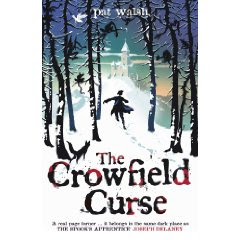 Mr Ripley's Book Review
I love the mix of subjects which the author has used to make this story a really good read. S/he has delved into the world of monks, angels, fays, magic and the great character of Master Bone (a cursed leper). The author manages to weave all of these aspects into a traditional-type spun story, which I believe is written incredibly well. The story is original, with the added religious and dark magic theme, giving the story depth and ambience. The book was actually short-listed for the Time's Children's Competition in 2008, which just shows how good it is.
It is a gripping read, taking you on an adventure which is truly wonderful and thoughtfully executed. I had to put the book down now and again (unfortunately the reality of life and work took over) but every time I left it I wanted to know more, and got excited about finding out what was going to happen next. A stunning read with the use of a great deal of memorable detail. The ending of the book was particularly good, leaving it open for the next installment which I look forward to reading.
I give this book four out of five, only because I believe that book 2 will deliver even greater things. I wonder if it has been started yet? Can't wait to read it!


Synopsis
It's 1347 and fifteen-year-old Will, an orphan boy, lives at Crowfield Abbey. Sent into the forest to gather wood, he rescues instead, a creature from a trap - a hob, who shares with Will a terrible secret. Somewhere in the forest behind the abbey where he lives,is a grave. And buried deep in the snow is an angel. But how can an angel die? What has it to do with the monks of the Abbey? When two hooded strangers arrive at Crowfield asking questions about the angel's grave. Will is drawn into a world of dangerous Old Magic. The Crowfield Feather was short-listed for the Times Chidren's Fiction Competition in 2008. This is a stunning debut novel and the first of a two part series.