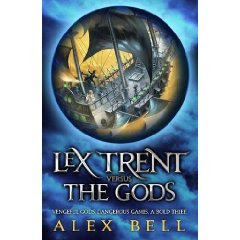 Thanks to Sam for sending me more details about this great forthcoming title. I mentioned this book some time ago, in the February picks post, as it looks a great read. I for one, am really looking forward to reading it once it's been published.

Perfect for fans of The Edge Chronicles, Lex Trent Versus the Gods is the first in a new comic fantasy series by brilliant Gollancz author Alex Bell. The book turns on its head the notion that cheats never prosper, following trickster Lex Trent as he cheats, swindles and lies his way to the top under the guidance of the Goddess of Fortune.“There are some people who are born lucky. They seem to float through life on little golden wings whilst misfortune, hardship and calamity hurry to get out of their hallowed way. One might say that Lex Trent was such a person.”


Whilst Lex is seemingly dedicated to his legal studies he’s always enjoyed a challenge – which is why he leads a double life as the notorious cat burglar ‘The Shadowman’ who has been (luckily) evading capture for years.  But Lex’s luck is about to run out because the Goddess of Fortune has selected him to be her player in the highly dangerous Games. Losing is not an option for Lex (particularly as it so often involves dying) but can he really win each of the perilous rounds? Given that the reward for doing so is money, fame and glory – all things that Lex is quite keen on – he’s going to do whatever it takes to make sure he will... and he’s certainly got good experience of cheating.

About the author
Alex Bell has always wanted to be a writer but had several different back-up plans ranging from a dolphin trainer to animal shelter vet but then, at fifteen, she had an epiphany involving John and Robert Kennedy and decided to become a lawyer instead.  She studied Law on and off for six long years before the boredom became so overwhelming that she had to throw down the textbooks and run madly from the building. Since then she has never looked back.

I got this today! It looks great - I think you'll love it :)