This week I have had the chance to sit down and enjoy some quality reading time, as a result I've managed to read many great books. Unfortunately I just don't have the time to review them all. Therefore I have decided to list them, with a brief synopsis, in order for you to read and make up your own mind. Hopefully you'll be able to find a book that takes your eye - there's so much choice!


Here are the books as follows: 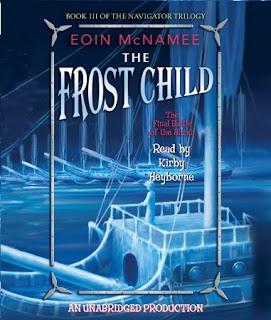 Book Synopsis
Twice the Harsh have tried to destroy time, and twice Owen and the Resisters have banded together to stop them. In City of Time, Owen killed the Harsh king, and now the Harsh are hungry for revenge. Their massive fleet is ready to set sail on the sea of time and hunt down the wily Navigator. In this third and final adventure, the Navigator and his friends use every last ounce of bravery and endurance to fight the toughest battle ever. As Owen searches for a solution, he travels through time to meet his father and grandfather, and discovers that the mysterious Frost Child holds the key to the power of the Harsh. 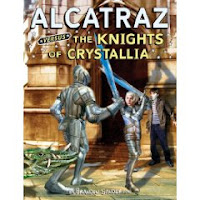 Brandon Sanderson - Alcatraz Versus The Knights Of Crystallia - Published by Scholastic Press - U.S
Book Synopsis
When Alcatraz and Grandpa Smedry make a pilgrimage to the Free Kingdom city of Crystallia, the Smedry home base, Alcatraz is shocked to see that he is, in fact, a legend. When he was a baby he was stolen by the Evil Librarians, and his mother, a Librarian herself, was behind the whole scheme. Now, with his estranged father, who is acting indeed strange, Bastille, who has been stripped of her armor, and Grandpa Smedry, who is, as always, late to everything (that's his Talent), Alcatraz tries to save a city under siege. From who? Why, the Librarians of course!

A mix-up with their reservations forces Harvey from New York, Mistral from Paris, and Sheng from Shanghai to share a room with the hotel owner’s daughter, Elettra. The four kids discover an amazing coincidence—they all have birthdays on February 29, Leap Day. That night, a strange man gives them a briefcase and asks them to take care of it until he returns. Soon afterward, the man is murdered.

The kids open the briefcase. In it they find a series of clues that take them all over Rome, through dusty libraries and dark catacombs, in search of the elusive Ring of Fire, an ancient object so powerful that legend says even a Roman emperor couldn’t control it.

In the first book of the Century quartet, Italian author P. D. Baccalario begins a mystery that will take four cities and four extraordinary kids to solve. 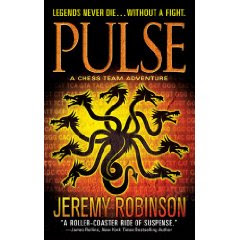 Jeremy Robinson - Pulse(Chess Team Adventure) - Published by Thomas Dunne Books - U.S
Book Synopsis
Imagine a world where soldiers regenerate and continue fighting without pause, and where suicide bombers live to strike again. This is the dream of Richard Ridley, founder of Manifold Genetics, and he has discovered the key to eternal life: an ancient artifact buried beneath a Greek inscribed stone in the Peruvian desert. When Manifold steals the artifact and abducts archaeologist Dr. George Pierce, the United States Special Forces Delta operative, Jack Sigler, callsign King, and his 'Chess Team' - Queen, Knight, Rook, Bishop and their handler, Deep Blue - give chase. They must save Pierce and stop Manifold before they change the face of genetics - and human history - forever. 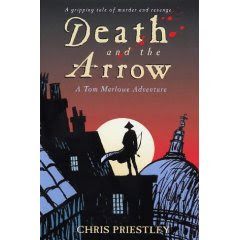 Chris Priestley - Death and the Arrow(Tom Marlowe Adventure) - Published  by Corgi Children's - U.K
Book Synopsis
Fifteen-year-old Tom helps his father run a print shop in London. When he and old Dr Harker hear of a curious murder in the City, with the victim pierced by an arrow and holding a card of 'Death and the Arrow', they are intrigued. And as more victims are discovered, the mystery closes more tightly.
Posted by Mr Ripley's Enchanted Books on January 31, 2010