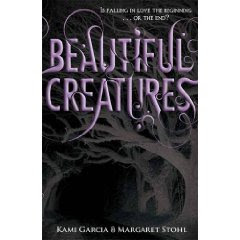 Book Review
The appearance of Lena Duchannes, into the small town of Gatlin, South Carolina, caused a great stir amongst the townspeople. Not only was she new to the area but she was also a relation of Macon Ravenwood - a man who nobody really knew, or claimed to know, and yet they all spent much time speculating about him.


The book quickly establishes intrigue through Ethan Wate’s disturbing dreams. As the narrator he shares his initial description of falling (in which he smells a distinctive lemon and rosemary scent), as well as his raw emotional feelings, which soon become a significant part of the storyline.


The story is captivating, as many distinctive characters add further developments to an already rich and varied plot. Some aspects of the storyline are answered quickly, whilst others are pieced together over time and yet even then, the route to their final destiny twists and turns to an ending which is not established as an obvious path from the outset. The differing relationships between characters . . . .  soon adds to the unexpected.


The connection between Ethan and Lena is a particularly powerful one. They soon become bound together by an everlasting love for each other, or so they hope, but with the curse of the sixteenth moon - nothing should and can be taken from granted.


The flashbacks, which Lena and Ethan have, add further intrigue to the story - especially as they involve their ancestors. The parallel storyline adds a different dimension, and yet, still delivers vital information to support the ongoing plot. I thought this was very well developed, and as a result, heightened the intensity of the characters.


A gripping and memorable read from a book that I certainly found hard to put down. At least until I‘d eventually reached the final concluding page . . . . . . .


In Ethan Wate’s hometown there lies the darkest of secrets . . . There is a girl. Slowly, she pulled the hood from her head. Green eyes, black hair. Lena Duchannes. There is a curse. On the Sixteenth Moon, the Sixteenth Year, the Book will take what it’s been promised. And no one can stop it. In the end, there is a grave. Lena and Ethan become bound together by a deep, powerful love. But Lena is cursed and on her sixteenth birthday, her fate will be decided. Ethan never even saw it coming.
About the Author
Kami Garcia is a teacher and reading specialist with an MA in education, and leads book groups for children and teenagers. Margaret Stohl has an MA in English and studied creative writing under poet George MacBeth at the University of East Anglia, Norwich. They both live in Los Angeles, California, with their families. Beautiful Creatures is their debut novel.
Posted by Mr Ripley's Enchanted Books on January 27, 2010