The Incorrigible Children of Ashton Place: Book I: The Mysterious Howling 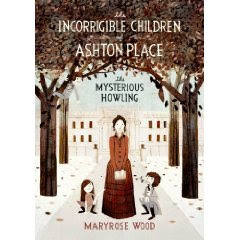 Fresh from the Swanburne Academy for Poor Bright Females, 15-year-old Penelope Lumley reports to remote but palatial Ashton Place and discovers just why the advertisement for a governess indicated a strong preference for "Experience with Animals." The three young children are not the offspring of disdainful newlywed Lady Ashton but were recently found in the forest, raised (apparently) by wolves. Lacking magical props but in every other respect a Mary Poppins in the bud, Miss Lumley quickly gets the wild but winning trio out of the barn and into the nursery, washed, properly dressed and thanks to a savvy strategy of "careful demonstration, a great deal of repetition, and the occasional use of tasty treats"on the road to civilized behavior. Tongue so forcibly in cheek that medical intervention may be required, Wood plunges her inexperienced but resourceful heroine into an unusually challenging domestic situation, winds the plot up and closes with an aftermath laced with tantalizing hints that All Is Not As It Seems.

Found running wild in the forest of Ashton Place, the Incorrigibles are no ordinary children: Alexander, age ten or thereabouts, keeps his siblings in line with gentle nips; Cassiopeia, perhaps four or five, has a bark that is (usually) worse than her bite; and Beowulf, age somewhere-in-the-middle, is alarmingly adept at chasing squirrels.

Luckily, Miss Penelope Lumley is no ordinary governess. Only fifteen years old and a recent graduate of the Swanburne Academy for Poor Bright Females, Penelope embraces the challenge of her new position. Though she is eager to instruct the children in Latin verbs and the proper use of globes, first she must help them overcome their canine tendencies.

But mysteries abound at Ashton Place: Who are these three wild creatures, and how did they come to live in the vast forests of the estate? Why does Old Timothy, the coachman, lurk around every corner? Will Penelope be able to teach the Incorrigibles table manners and socially useful phrases in time for Lady Constance's holiday ball? And what on earth is a schottische?