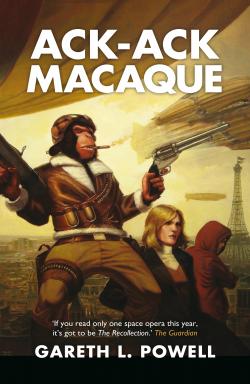 Warning: This book contains graphic scenes of violence and language which is definitely not suitable for anyone under the age of sixteen.
From time to time I dip my toes into the pond and when the waves ripple then you will occasionally find me reading a book written for adults. On even rarer occasions, you may even find that I actually like it. Therefore, when this happens, I feel that I should rightfully review it; tapping the keys at this very moment I shall summarise my thoughts and feelings about this particular book. It will then be put to rest in the archive of book reviews (otherwise known as Mr Ripley's Enchanted Books library!)
I have actually read a slightly different version of Ack-Ack Macaque a few years ago. At the time, I felt that it needed a little bit more personality and meat to it. If you're not familiar with the short story (Interzone - fiction magazine) then you may not have realised or understand why I would say this. Especially as this newer version is absolutely amazing and fantastic; the book title is also ingenious and, just like the author, I love to say it out loud. It just rolls off the tongue and makes you smile - just like the book itself.
I love books that are firmly set in a Sci-fantasy world. This story begins in the futuristic world of 2058, where power has shifted to a stronger European commonwealth due to a merger in the late 1950's. Nuclear-powered Zeppelins, the threat of world war and the total destruction of the world is all in existence. There is a mad cult named the Undying and a twisted, power-crazed woman named Celeste, who is behind a manic plot to rule a new world. What more do you want? Well, I could begin to mention Ack-Ack Macaque and his life through the virtual world, but I really don't want to say too much more about this at this point.

The main character, Ack-Ack Macaque, is written particularly well and each scene has been very well planned and thought out. He is definitely unique when it comes to being an all action-hero. He is one that you will love to read about - a cynical, one-eyed, cigar-chomping monkey who particularly likes to kick ass whenever he gets the chance. He's a Spitfire pilot, who has a penchant for daiquiri and bananas, and shoots down anything from German aircraft to parachuting Ninjas. You may think that this sounds really cool and you'd be right...!
Equally, you might be thinking at this point that this sounds a tad cheesy, but Gareth really has written a belter of a plot. It really does leave you gripped - there is certainly more to this story then just Ack- Ack. Although for me, he really does play a crucial and innovative part. Nevertheless, the story is also plagued with evil - characters such as Berg, who steals brains and electronic soles. He injects a particularly darker side to the story; he really will make your skin and flesh crawl. Parts of the story are very graphic in detail - an element that captivated me as it gave the story a hearty punch in the right direction.

This is an action-packed story full of colossal ideas and a host of great characters - some that you will instantly love and others that you really won't. The story is very detailed; it quickly thumps along to its own rhythm. It has originality in spades and buckets full of tension; it's a fantastic world in what could be. I really connected with this book and loved every minute of it. It has a great ending which does not let you down. Instead it lets the mind stew on what may happen next, if anything. This is the best book that I have read in a very long time from the adult Sci-Fi world - I look forward to visiting this world again in the not to distant future.