Book Review: The Boy with 2 Heads By Andy Mulligan - Published by David Fickling 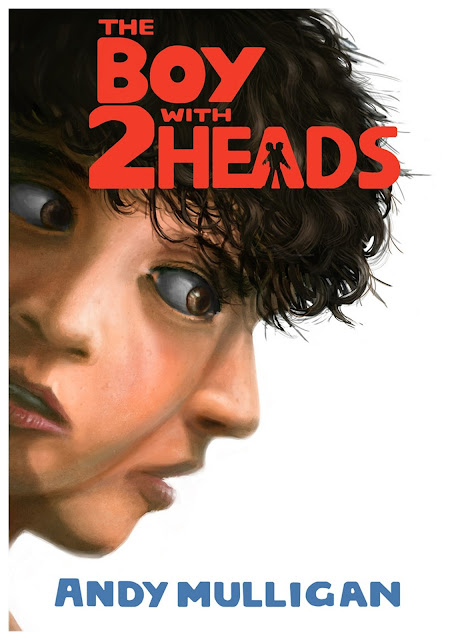 I have to say that once again Andy Mulligan has written another outstanding story. It is slightly different to his previous books as he tackles some really quite serious day-to-day life issues in this one. It's a really gritty perspective of life told through the eyes of a group of children. They all have their own individual story to tell which is weaved seamlessly into one fantastic story.

Richard is a normal boy until a lump starts to grow on his neck. At this point, his life changes forever. He wakes up to discover that he has grown another head - a breathing and talking head. Known as Rikki this additional head is rude, rebellious and very difficult. This idea, at this point, could have easily gone wrong as both Richard and Rikki's dialogue could have been read as one voice. However, I believe that Andy has got the balance just right by giving them their own clear narrative which is psychologically gripping and very intense in some places.
This is a very clever and original idea. It is a poignant and heart-warming story about life and all the hardships and troubles that this can bring e.g growing up, unfairness in the world etc. These are all dealt with and addressed in their own unique way which makes it a fascinating and brilliant read. Each character has to cope with the complexity of life and learn to deal with their own circumstances. This is all told in a very skilful way.

The backdrop of school life brings a large slice of reality and realism, but there are still some small elements of fantasy which give a balance to the story.

The book has so much going for it; one moment it is serious and the next it's humorous. However, there are also a lot of dark and horrifying moments in the book. These will set you on the path of moral thinking.  As an adult, I also gained a great sense of feeling as to what is was like to be a child again which was very interesting.

The ending is very unexpected and well thought out. It may shine a light down a dark tunnel but I shall say no more! This book is an entertainment extravaganza from the first page to the very last. It is a thought provoking read that will stay with me forever. Another blinding story from Andy Mulligan, which delivers the unexpected with superb imaginative qualities. I believe that he is one of the best storytellers around.