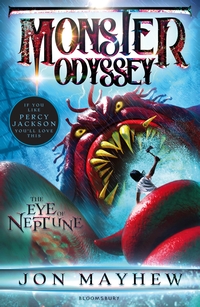 A huge red tentacle gripped a sailor and whisked him above the deck. Dakkar caught the look of horror in his staring eyes as he vanished, dragged over the side and into the sea. Water rained down on the deck as more tentacles squirmed their way over the side and across the deck or through the rigging. Men's shouts of anger or terror mingled with the odd gunshot.

This is the fourth book by Jon Mayhew - it is due to be published by Bloomsbury this month. This book is slightly different from Jon's previous books as it's not just about the frights and spills of horror. It is instead a pure epic fantasy from the bottom of the ocean. Jon, at an early age, was captivated like so may of us by the classic 1950 Disney film 20,000 Leagues Under the Sea. This was of course originally written by the great man and author, Jules Verne.

At the time, the film industry was making great leaps and bounds with new technology. This film captivated many watchers, just like the book. It has certainly inspired Jon to be very creative historically - additional embellishments through a creative vision creates a mix of 200,000 Leagues and The Mysterious Island. A memorable and enchanting read has been created that will have you in awe. You'll be gripped by the strongest tentacle and dragged down into the deepest depths of fantasy.

The main character in the book, Prince Dakkar, will rejuvenate the memory of Captain Nemo in so many ways. I'm hoping that he may pave the way for many future stories. Son of an Indian Rajah, he certainly has issues with authority, as he was expelled from the world's finest schools and finally sent to an unconventional educator known as Count Oginski. Unsurprisingly, Dakkar plans his escape immediately and eventually sets off on a roller-coaster adventure. This is a seafaring-tale that will have you splashing about wanting much more.

Count Oginski is a genius inventor, as a character he works really well for me. Although, in my opinion, he might be a little bit stereotypical but nevertheless he is very mysterious and definitely interesting to read and follow. Another key character is the sinister Cryptos, who is hellbent on taking over the world. He's just like a super villain from a Bond movie as he lives in a fantastic hideout where he can be found plotting evil world domination.

This book was brilliant - it has all of the classic ingredients that will take you back to your childhood. Assassins, espionage and a mind boggling adventure. There are pirates and a big giant squid, which is just pure magic as it creates some epic, high-octane, action sequences.  Whilst a whole host of deadly sea creatures produce a horrifying element that cannot be imagined. All of which is told at a blistering pace - the pure fantasy and imagination does not let up until the very end of the book.

Jon's new adventure has taken him into a new territory, but he has certainly come up trumps. I loved this book as much as his other stories. He has a great ability to conjure up something really special which transports the reader back to their childhood roots . . . . . just like the classic film all those years ago. Fantastic reading - I'm sure that you'll love this book as much as I did.

Published by Bloomsbury May 9th 2013