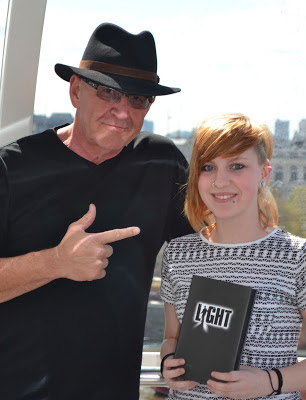 Author of the bestselling GONE series, Michael Grant, meets the winner of GONE Online on the EDF Energy London Eye

www.gone-online.com
On Saturday 4 May, the bestselling author of the GONE series, Michael Grant, met the winner of GONE Online.  The game was created to celebrate the publication of LIGHT, the sixth and final book in the GONE series, which was published on 28 March and topped the children’s bestseller charts in both the UK and Ireland.
Lucy Woodcock, aged 18, whose gaming alias was Dionysus, won the game beating over 2,400 players to the prize.  She wins an Apple iPad and met Michael Grant during a trip around the EDF Energy London Eye. Lucy is from Wolverhampton and is a college student at Dudley Sixth in the West Midlands.

GONE Online (www.gone-online.com) was launched in March and ran over 6 weeks, seeing a series of mini games released on a weekly basis.  They were designed to challenge, infuriate and test the players’ skills.  Some games rewarded time and speed, others ability and knowledge of the books.  Using the latest in location-based marketing, players could pick up extra points by checking in with their smart phones at specific locations – bookshops or libraries.

By the close of play, over 53,000 games had been played with 57 million points scored in total.  Lucy Woodcock was a clear winner scoring over 226,000 points.  She comments, “I started playing the games because I really wanted to meet Michael Grant, and I wanted to see what the games were like especially the word search and the quiz. After playing them for a little while I got into the competitive element of the games and I was really enjoying playing them.”

The game is hosted on a dedicated website and can also be played on smart phones.  Players of any age were able to play but only UK residents aged 21 years or under were eligible for the competition.  The game is still available to play, although no prizes are now available.

Michael Grant comments, “I am amazingly bad at games, so I’m particularly impressed by the fans who have done so well.  Thanks to them for their enthusiasm and support.  It’s very humbling.  Thanks to all who played and all who outscored me … which was probably everyone.”

GONE was the first instalment in the epic teen series which has become hugely popular with teenagers internationally and has been lauded by Stephen King as ‘exciting, high-tension … told in a driving, torrential narrative that never lets up.’

Over 400,000 copies of the books have now been sold in the UK alone.
Lucy Woodcock continues, “I first started reading the series because the cover caught my attention while I was in a book shop, I read the blurb and I was interested in reading them so I bought GONE. When I'd finished reading it I was really impressed! I searched online to find out when the next one would be out because I couldn't wait to find out what would happen to everyone. I was really glad that it wasn't a book that censored the violence because that's what made the story more realistic (except the powers) knowing that anything could happen to them at any time and not everyone would be able to cope with being trapped, especially teenagers. I've loved following the books and trying to guess how the FAYZ happened, what the Gaiphage was or how little Pete was involved, although I wasn't impressed when Michael killed my favourite character! I was really happy with how the series ended overall, even though it was really emotional.”

Mike Richards, Marketing Director at Egmont Press, comments, “This competition was part of a broader campaign for the publication of LIGHT and we’re delighted that it has been won by such a big fan of the series. We’re also celebrating the book having launched straight into the bestseller charts and I take a good deal of personal pride in outscoring Michael in the first trivia game.”