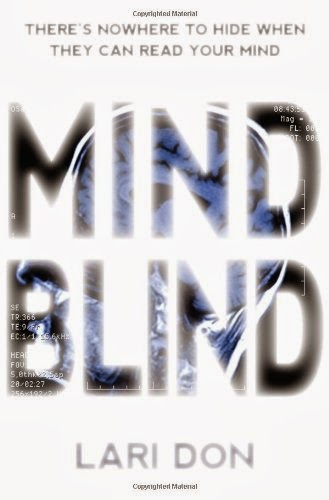 Lari Don's Mind Blind is another offering from the newly formed  KelpiesTeen.  This is a brand new teen fiction imprint showcasing Scottish books with attitude. Launched this March, the publishing company has award-winning authors Roy Gill, Gill Arbuthnott and Lari Don discovering the dark side of Scottish fiction through their spectacular stories.

This is new territory for Lari with her first venture into teenage fiction. This story is told from the perspective of a teenage boy called Ciaran and has been particularly well achieved, in my opinion. The story unfolds inside Ciaran's head and/or when he's inside Lucy head, which might not make sense to you yet but it will once you have read the book.

The opening part of the story is immediately captivating with the opening lines ' I killed a girl today, just after the school bell.' This opener literally drags you into the story head first. Although, I did find the first part of the book a little slow going but it was still very intriguing - I really wanted to know more. After the first two chapters, I soon started to glide along once I had got to grips with the first person perspective of seeing the world through Ciaran's eyes, but also alternating between the two different voices of Lucy's feeling and emotions told through the eyes of Ciaran.

Ciaran Bain is a criminal with a special talent: he can read minds. This also comes at a price, emotionally and physically with gripping consequences that makes for brilliant reading. Ciaran's voice punched away in my head and fuelled  me with adrenalin all the way through this adventure. I felt like I was part of the world that Lari had written.

Lucy Kingston Shaw is another main character. However Lucy's sister is dead - she was killed for a secret that Ciaran's family want to bury.  Both characters are thrown together in an epic voyage of discovery as they journey to uncover the deadly secret between their families. They can run but they can't hide; not even from their own minds.

There is enough in this story to keep every reader hooked. It is told through a realistic setting with no magical scenario involved. It is just the pure concept of mind reading which, in this set of circumstances, is an hereditary skill. The deep family turmoil and unlikely friendship both feed off the strong themes of hate, fear and family loyalty which thread through this book. It is a story that will make you think more deeply than most - this is normally something that I might have run away from, but in this case I absolutely loved it.

This is a great story that has been published by KelpiesTeen. It is a book with attitude, freshness and a story that teens will relate to very much. It has a memorable and fascinating theme that is unique to other current teen fiction that is around at the moment. There's nowhere to hide when your mind can be read. This is available to purchase  in bookshops now - go and grab yourself a copy now.