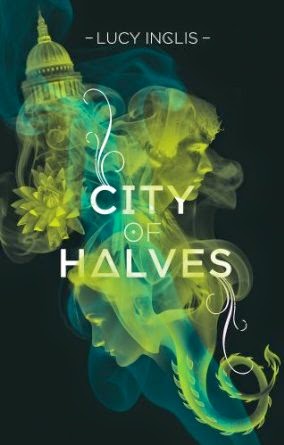 London. Girls are disappearing. They've all got one thing in common; they just don't know it yet. Sixteen-year-old Lily was meant to be next, but she's saved by a stranger: a half-human boy with gold-flecked eyes. Regan is from an unseen world hidden within our own, where legendary creatures hide in plain sight. But now both worlds are under threat, and Lily and Regan must race to find the girls, and save their divided city.


Okay, so what have we got?’ Lily’s dad paced the kitchen in
his shirt and tie, running his fingers through his fading blond
hair.
Lily put her chin in her hand and stared at her laptop. ‘I told
you, Dad. Not enough. The guy who sold her the papers is a
visa-passport-whatever faker. Facial recognition on the CCTV
has had him in the City a few times recently, but he doesn’t stay
anywhere long enough to get caught. And without him, we’re
not going to get any further.’
Her father rubbed his face, then folded his arms. ‘What’s he
doing in the City?’
She shrugged. ‘Pubs, mainly. Probably meeting clients.
Although there are a couple of places he goes that I can’t figure
out. Most likely dead drops, just leaving the papers for people
to come and collect. One derelict alley in Bow Lane in
particular.’

Her father picked up his briefcase, a long black court gown
and the box containing his barrister’s wig. ‘We’ve only got a few
more days on this one. Till next week at the latest. If we can’t
find him, they’ll deport her.’
‘I know. But he’s left no online trail, and officially he doesn’t
exist. He accesses his email from random coffee shops. I’ll keep
trying, but . . .’ She shrugged and took a sip of tea from a large
white mug.
He rubbed her curly head as he passed. ‘Good girl. Wish me
luck.’
She grinned. ‘You don’t need luck. You’ll ace it.’
‘Thanks to my star researcher.’ He winked.
‘For a big corporation with so much to hide, they were
sloppy. That firewall wouldn’t have kept out the cold, let alone
anyone who actually wanted to get into their system.’ She
smiled. ‘Besides, it was you who taught me how to find fraudulent transactions.’
Her father paused suddenly, looking at her.
‘What?’ she said.
He hesitated before replying. ‘Nothing.’ He blinked. ‘You
looked so like your mother then, I . . . it just caught me up
short, that’s all.’

Lily glanced towards the photographs on the table against
the sitting-room wall. The most recent had been taken in
Temple Gardens on her sixteenth birthday, the vivid autumn
leaves behind her picked up by the colours in her hair. She was
a smaller, sharper version of the mother she had never met, but
they shared the same soft ringlets in a shiny mixture of gold and
bronze. They also shared pale skin and large green eyes framed
by dark lashes and eyebrows.

Lily’s father turned for the door. ‘There’s money on the table
if you need anything. Why don’t you go and meet your friends?’
‘Thanks. I think Sam’s busy. Her cousins are over from
Canada or something.’
‘Right. Well, make sure you eat, please.’ He straightened his
tie in the hall mirror.
‘Yes, Dad. Go, or you’ll be late.’
He reached for the door handle.
‘And good luck!’ she called after him. The latch clicked and
she turned back to her computer. Through the window the
gulls wheeled against a leaden midday sky.
Lily and her father lived quietly, in a routine formed around
his work, her school and shared mealtimes. Their flat was
cramped and old, and Lily knew he didn’t earn that much, as
lawyering went. They lived in Middle Temple on the edge of the
City of London, a sort of ancient village full of lawyers with a
dining hall and library, right on the river. Lily’s bedroom had
white bedding, a desk and the Macbook her dad had given her
for Christmas. She adored it. Next to it was her brick of a
laptop, scuffed and scratched from too many accidents. It
was full of tag ends of code, script written on long, quiet
afternoons.
Coding was something Lily had discovered she was good at
by accident, after her school had run a short course in
computer programming. But creating programs that compared
consumer interest in products through Facebook ‘likes’ had
soon morphed into hacking Facebook, then the school system,
then the systems of corporations her father was up against in
court. It had become like an addiction, one Lily and her father
tried to put to good use.
By Mr Ripley's Enchanted Books on July 08, 2014