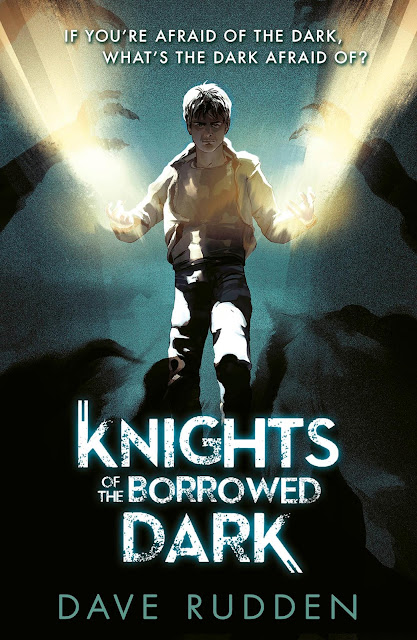 The first book in a new series about an orphan boy who discovers he is part of a secret army that protects the world from a race of shadowy monsters.
Grey placed his finger in the middle of the shadow.
'What's this?' he asked.
Denizen frowned. 'It's a shadow.'
'No, it isn't,' Grey said. 'It's a door.'
Denizen Hardwick doesn't believe in magic - until he's ambushed by a monster created from shadows and sees it destroyed by a word made of sunlight.
That kind of thing can really change your perspective.
Now Denizen is about to discover that there's a world beyond the one he knows. A world of living darkness where an unseen enemy awaits.
Fortunately for humanity, between us and the shadows stand the Knights of the Borrowed Dark.
Unfortunately for Denizen, he's one of them . . .

Sorry for the early review. I know that I'm very naughty, but I really wanted to share this book with you .....

What can you expect from this debut Irish author? Well, come a little closer and I will tell you my dear reader. Let's turn the opening pages to this Irish fantasy and walk the thrilling tight rope of The Knights of the Borrowed Dark. This first instalment is an epic 11+ fantasy adventure trilogy based around a boy called Denizen Hardwick. It will be published by the mighty Puffin books in the UK on the 7th April 2016 and much later in the US by Random House Books (16th August 2016). Make sure that you check out the brilliant book cover by Owen Freeman.

If you put all your favourite Irish childrens' authors into a bowl and give it a mighty whisk, then this is the type of story that I would expect to unfold. There are many trademark features of fantastic authors all under the cover of this great book.The first amazing ingredient is a fantasy plot brimming with great imagination. The likes of such that we would often associate with the great Eoin Colfer. Then there is the creative art of making up the scary monsters - ones that are not your normal mundane type that you may find in some books. I am talking about real monsters that appear on the edges of your subconscious mind leaving you feeling very unsettled. In my opinion, Darren Shan does it better than anyone else, especially within The Demonata series which will always be one of my favourite series and the monsters in this book match up to this quality. Then we mix in a big dollop of dark magic which is topped off with a chilling and skittish atmosphere. Again, resonant of the great Derek Landy, who is a master of this and is incorporated very well into this plot.

Denizen is an orphan boy, who finds himself caught up in an ancient and secret battle between an order of magic-wielding humans. A shadowy race of monsters, known as the Tenebrous, and their powerful master, the Endless King, are locked in battle with the humans as they try to wreak havoc over the human world. Denizen is not a natural hero; he is very much a loner - he reads far too many books, questions everything and lacks confidence in the real world.

On a particularly dark night, the electric energy flows and the gates of Crosscaper Orphanage open. A car growls with power into the driveway of the Orphanage and the mysterious adventure begins. The car and the man in it retrieve Denizen with the promise of introducing him to a long-lost aunt. But on the ride into the city, they are attacked. Denizen soon learns that wicked angelic-like monsters can grow out of the shadows. Once you start to read this exceedingly good adventure, you will soon be compelled to turn the pages. Like a maelstrom, you will be swirled and sucked into a vortex of monsters, a magical world and a secret order that might change your perspective.


This book is very cool. It has a very effective plot which is blended with humour and memorable monsters playing havoc in an atmospheric world of darkness. I loved the aloofness of some of the characters. This leaves you never really knowing them or what they are thinking or doing, which makes you guess what's coming next. This book will have you running from your shadow and fleeing from the darkness of your imagination. It is a story to read at your peril and a fantastic start to a trilogy. Can you keep this high standard and amazing story writing flowing, Dave? I am sure that you can and I look forward to reading the next book in the trilogy.
Posted by Mr Ripley's Enchanted Books on February 09, 2016