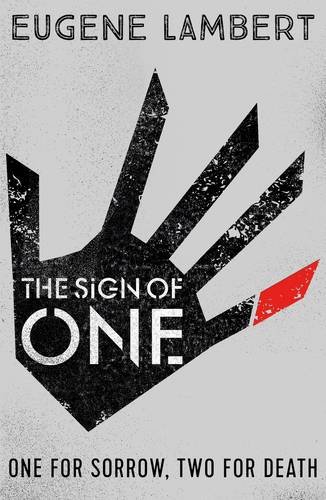 One for sorrow, two for death…
On Wrath, a dump-world for human outcasts, identical twins are feared. Only one will grow up human, while the other becomes a condemned monster with ‘twisted’ blood.
When sixteen-year-old Kyle is betrayed, he flees for his life with the help of Sky, a rebel pilot with trust issues. As the hunt intensifies, Kyle soon realises that he is no ordinary runaway – although he has no idea why he warrants this level of pursuit.

Here is the first book in an exciting new trilogy, THE SIGN OF ONE, which will be published on the 7th April 2016. Published by Egmont's Electric Monkey Imprint with book two, INTO THE NO-ZONE & and book three hopefully following 9-12 months apart. This is the first gallop into Eugene's fantasy mind; a dystopian adventure that will gravitate you towards a barbaric world known as the world of Wrath. So welcome one and all to the world of Wrath......

It's a place like no other in the fantasy universe. The setting is pitch perfect; a bleak scene of neglect and isolation, where the dregs of humanity were evacuated a long time ago. What adventures lie within this world when most things here are out to kill you, even the wildlife? As you move around and through this brilliant plot you may want to keep your whits about you, as you may get caught up in the deadly grasp of the longthorn trees, with deadly finger length barbs. I would always recommend you stay well away from the 'razor' grass - I'm sure you don't really need me to tell you why.

The theme of this book is that twins are seen as evil. As Eugene (the author) is a twin, I'm not sure who is the evil one at home, but in this book you are sentenced to death. This brings about an interesting and thought provoking question with results that will surprise the readers, especially later on in the story. However, say no more "Mr Ripley" I hear you shout - we will have no spoilers here. The book does have a feeling of Mad Max which the press release identified and, for once, I agree with this comparison, but it is definitely not similar to Hunger Games, in my humble opinion.

The main character Kyle was not the best character for me in this book. I never really identified with him as well as I would have liked, maybe it was his weaker personality. However, the other characters were brilliant and Sky, a fiercely independent  glider pilot, has been written particularly well. I really wanted the best for her, as she was really likeable. I wanted to find out more about her and her past life. She is the great battler of the narrative with her own hidden agenda which swung their reluctant adventure along some great twists and turns.

This book is basically a Sci-fi collision of all of Eugene's favourite films from his younger days which have been thrown into a fantasy melting pot and, to me, it really works. I really loved reading this wonky and not so perfect world of flying machines as well as robotic destructive machines. The characters have to survive the best that they can by foraging and scavenging though the industrial forgotten landscape which is all very atmospheric. Written with a very real like quality,  you will be really captivated to read the story for this reason alone. I believe that this is the best Young Adult read so far this year... It is a great start to a trilogy and probably the best that I have read in a long time, so well done Eugene, this book has lived up to my expectations.

One for SORROW, Two for Death and Three for Readers JOY!
Author's guest post will follow next week, make sure you check that out as well!
Email Post
Labels: Action Adventure April 2016 Debut Electric Monkey Fantasy SCI-FI Teens Young Adult