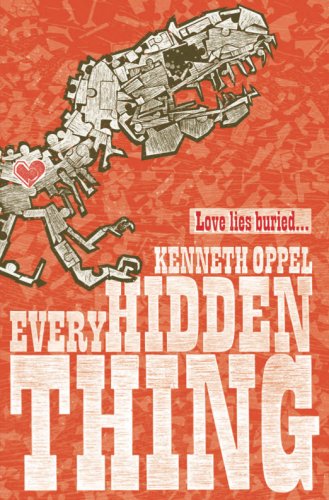 Deep in the Badlands, embedded in rock and sand, lies the skeleton of a massive dinosaur, larger than anything the world has ever seen.

For Samuel Bolt it's the dinosaur that could put him and his father into the history books. But Samuel and his father aren't the only ones on the trail. Rachel Cartland is dreading a future of housewifery or spinsterhood. But the Rex could be her ticket to finally explore her love of science and adventure.

Samuel and Rachel are pushed closer together as their paths cross and the rivalry between their fathers becomes more intense. And with both after the same prize, any romance seems destined to fail. Can they find the skeleton-and with it a new life together-or will the rivalry tear them apart?

What would it be like to be the first person to dig up a massive dinosaur bone? One of the first recorded fossil finds was here in England in 1676. According to the history books, a huge thigh bone (femur) was found by Reverend Plot. It was thought that the bone belonged to a "giant," but was probably from a dinosaur. Kenneth Oppel uses this as a basis for his story which takes us on a fantastic ride. With his wild imagination, he writes a brilliant story that will take the reader back in time to the 1800's - a period of discovery within the ever-evolving America landscape.

The idea for this book really hooked me; it really is a ground-breaking beast of an idea. I was gripped with the narrative from the very first page. The american cultural perspective from that time captivated me until the very end of the book. You will be pulled along by a seductive charm of the characters, setting and the time period. The story will whip up a sand storm of fantasy and magic that will run away with your imagination.

Every Hidden Thing really sums up the story of adventure and the pioneering discovery of evolution in more ways than one. It takes a good look at people around that time and explores the plight of the native American Indian which will draw you into the world of action, adventure and pure escapism. The author has obviously done a lot of research into the history at this time, which has really given an element of authenticity to the plot and helped with the fantasy realism which, in my opinion, makes it really enjoyable.

Wild wild west takes a head-on collision with palaeontology is the best way to describe this novel. It is a race against time to uncover the biggest discovery and name a new species of prehistoric dinosaur. This is a KING REX like no other.

Running alongside the action-adventure narrative, there is an undercurrent of romance and forbidden young love. Samuel and Rachel find it very hard going when their fathers bitter rivalry comes to ahead. However, this drives the characters together to become romantically involved. I'm not really keen on this aspect, but I am interested to know what you all think.

Oppel has expertly tied together a number of strong themes including: rivalry, danger, and a strong bitter competition that drives the characters to make some bad decisions. It is a fantastically paced and harrowing story that should be read as well as loved in so many ways.