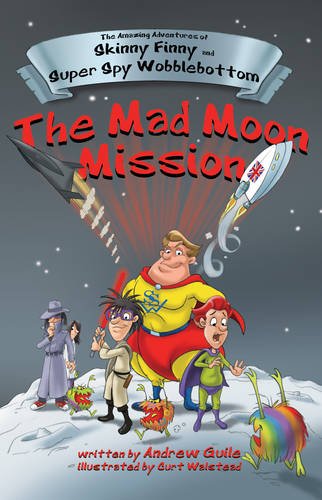 This is the second book by Andrew Guile involving Skinny Finny and his sidekick brother, Tubby. It's a crazy adventure that will make you laugh your socks off. It is a magically illustrated fantasy affair that everyone will love, regardless of age. To tempt you all to read it, I have asked the author a range of questions regarding the book and his writing career. I hope that you enjoy this interview and it will grab you enough to pick up this book and read it.

The Amazing Adventures of Skinny Finny and Super Spy Wobblebotton is out now. Grab a copy in your flying superhero cape.

Who do you think will love reading The Amazing Adventures of Skinny Finny and Super Spy Wobblebottom: The Mad Moon Mission?

I would hazard a guess at boys between 8-12 years old. Skinny Finny dreams up all sorts of crazy gadgets and boys often like that sort of thing. I do hope that girls read the book too. I specifically chose to introduce a female viewpoint character in this book for this very reason so I do hope it works!

A good villain is hard to write, how did you get in touch with your inner villain(s) to write this book?

I think, if we are honest, we all have a dark side though most of us are good at keeping it hidden. From an author perspective, I suspect it comes down to honesty. If you’ve taken the time to look critically at yourself over your lifetime, you’ll find it easier to tap into the more negative, villainous side of your own personality. I think I’m pretty good at that. I think though that all authors are bound to be influenced by what they have read and watched over the years too, that’s inevitable I guess. I also just try to put myself in the mind of the villain and think of things they can say and do that children would find alarming. I promise though that I have never held any children down and dripped lemon juice in their eyes! Not yet, anyway.

Of all the characters you have created, which is your favourite and why?

I think it’s probably Tubby. Sir Mimsey Parpington definitely has the best name but I have a real soft spot for Tubby. He’s accident prone and is never going to join MENSA but he views the world through rose-tinted glasses and it gives him I’m a vulnerable appeal. He also has a very clear moral compass that his brother could benefit from understanding better.

What inspirations do you think helped to make this book happen?

I began telling stories to my children many years ago. We used to make up stories together, using two or three words each and moving round in a circle with the next person adding their 2-3 words to the story before passing on to the next person, etc. That was great fun and produced some hilarious and bizarre stories. That morphed into me just making stories up myself and Skinny Finny was born. He was named after a kid I went to school with and ‘Wobblebottom’ was a phrase I pinched from Blackadder the Third. I made it into a name and then had Curt Walstead design him. 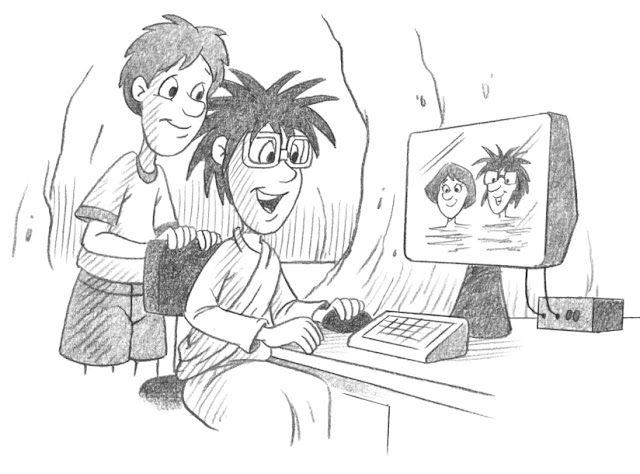 I always wanted it to be illustrated. I found Curt Walstead on Elance.com (now Upwork.com) and he pitched for the job alongside four or five others. He stood out over all the rest. I was very lucky to find him as he has a great pedigree having worked as an illustrator for Dora the Explorer, Diego and Baby Looney Tunes in California. He specializes in character development and I couldn’t be more delighted with his work.

Which scene in the book made you laugh the hardest?

Definitely the scene in Windsor Castle near the start of the book where Skinny Finny tells Tubby that he’ll do his duty and kick Tubby between the legs if Queen Elizabeth won’t. It’s the earnest way in which Skinny Finny tells it and the fact that Tubby takes him seriously. And then the punch line with the Kit Kat a little later on. It’s perhaps slightly more adult humour than child humour but I think it’s always a good idea for gags to hit different levels. Quite a few children will, I imagine, have the book read to them. It’s wise to entertain the adults too!

What tactics do you have and use when writing? (outline or do you just write)

I am definitely a planner. I can’t start writing the first draft until I have a chapter sketch mapped out. I need to know where the story is going and what the character arcs are going to be, etc. I love that development period where anything is possible. 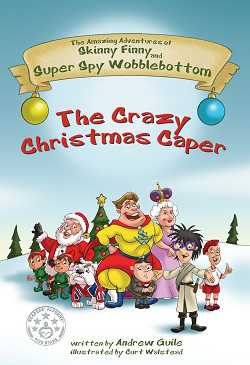 How did you break into publishing? Tell us about the process you were involved in?

I have been wanting to write for many years. I have read countless books about the craft and have been on many, many courses and workshops. Being a planner though, I didn’t want to start anything until I felt I knew what I was doing. That time of enlightenment coincided with the desire to write and publish a Skinny Finny story for my three children before they got too old. That came in 2013. I primarily self-published the Crazy Christmas Caper via Amazon.

The Mad Moon Mission is the second book that follows the antics of Skinny Finny and Super Spy Wobblebottom. For this second outing I used Troubador (Matador) who are a self publishing company. I used all aspects of their service including copy editing, typesetting and proofreading prior to publication. I also had an editor, Bella Pearson who helped me with the story structure. She was fantastic and has a great pedigree of her own having previously worked with Phillip Pullman.

Do you remember the first story you ever read and the impact it had on you?

Looking back, my earliest memories are of my reading books for school. I remember one in particular where the cover image was of two massive pillars at the end of a spooky driveway that leads down towards a derelict mansion. The pillars had gargoyles sat atop them and the story describes how these stone beasts come to life. Amazing! I have always been drawn to fantasy books and sci-fi. I just love the escapism. I can’t imagine writing a story that doesn’t have some element of sci-fi or fantasy.

What are you working on next?

I have stepped away from Skinny Finny for my next book. I’m working on a middle-grade fantasy adventure story. Tim’s life is changed forever when he, his best friend and his sister, find a portal to a world ravaged by warring dragons while on holiday in Cornwall. There he betrays his friend and is forced to face his own fears in order to redeem himself and rescue his friend from the evil Queen and find a way back home. It will focus on similar themes of family and friendship.

I’m writing this new story while attending the Golden Egg Foundation Course. I’ve sort of gone back to school I suppose! Golden Egg was set up by the great Barry Cunningham (the man who discovered J.K. Rowling) to develop and nurture children’s writers. It’s an amazing course that’s really helping me improve my writing further and I’m really excited for what I may next have in print.