Nicholas Gannon - The Doldrums and the Helmsley Curse (The Doldrums, Book 2) 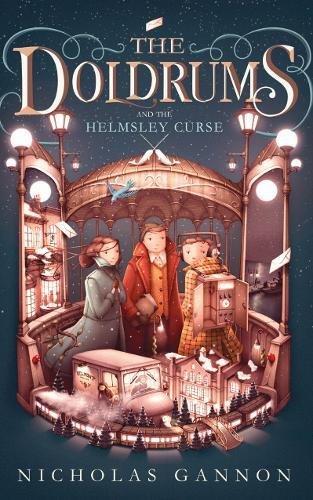 Last year one of my favourite reads was "The Doldrums" - a brilliant visual debut by Nicholas Gannon. However, this book, in my opinion, has generally gone unnoticed by the reading public. Please read what I had to say about it by checking out my book review HERE

A year later and the second book, The Helmsley Curse, will be published on the 16th November 2017 by HarperCollins Children's in the UK and the US. At first glance, it looks as visually stunning as The Doldrums. I'm really looking forward to reading a copy very soon. If you are interested then please take a look at the author's website The Doldrums Press. http://www.nicholasgannon.com

I hope that you read both of these books - I really don't think you will be disappointed.
Archer B. Hemsley and friends are back and yearning for adventure in this second beautifully told, stunningly-illustrated story from author-illustrator Nicholas Gannon.
After two years, Archer B. Helmsley’s famous explorer grandparents are finally coming home. They had been missing – abandoned on an iceberg – and Archer and his best friends, Adélaïde L. Belmont and Oliver Grub led an adventurous mission to rescue them.
Archer is overjoyed by his grandparents return. However, he seems to be the only one. Rumours begin to surface that Archer’s grandparents weren’t abandoned after all. People are claiming that they made it all up. Well, Archer knows those rumours are false, and with the help of his best friends and new neighbour, Kana, he is going to prove it. Off the foursome set, into a snowstorm and beyond, to restore his grandparent’s reputation.


The Helmsley Curse from The Doldrums Press on Vimeo.