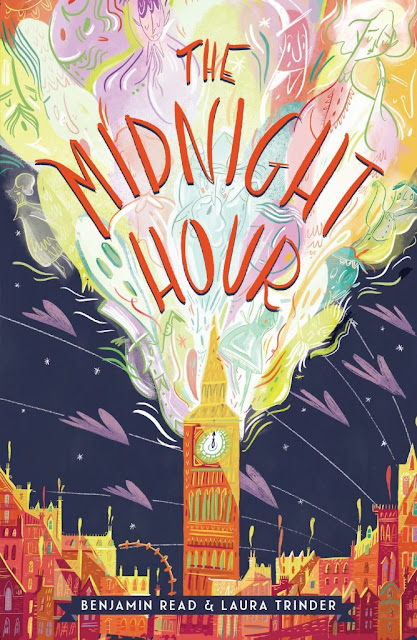 They must have come from under beds, out of mirrors, up from caves, and down from attics; all out of the darkness and into the moonlight. They were the Night Folk, and this was their world.

Emily's parents have vanished into the secret world of the Midnight Hour – a Victorian London frozen in time, home to magic and monsters. Emily must find them in the city of the Night Folk, armed only with a packed lunch, a stowaway hedgehog, and her infamously big mouth.
With bloodthirsty creatures on her tail, Emily has to discover the truth to rescue her parents. What family secret connects her to the Midnight Hour? And can she save both worlds before she runs out of sandwiches?

The world of fantasy is floating high in the sky of London with this debut novel which has been written by two ex-book sellers Benjamin Read & Laura Trinder. The Midnight Hour will strike into publication on the 7th February 2019. Published by Chicken House and developed in association with Altitude Films this book has very exciting prospects.

You'll love the fantastic book cover illustration by Hannah Peck capturing the story inside and shimmering particularly well in the light. However, dear reader, what can you expect from this little marvel? Well, when the clock strikes twelve a fantastically written heroine called Emily will come out to play. She will make you smile from ear to ear as she marches into a world of danger and intrigue with Hoggins the hedgehog and her runaway mouth. Together, they prickle with pluckiness and courage, as they face perilous danger from some very nasty characters. If you are expecting a midnight delivery over the next few weeks, then lock your DOOR and hide behind the sofa.

You'll be whisked on a magical bike ride into a fantasy full of mystery and postal madness, from the Daylight realm into the magical world of the Night Folk. What will you see? Take a peek through the letterbox and you will be entertained and thrilled from the very start. It sparkles and dazzles with a quirky narrative that is layered with magical spookiness and a large bit of kookiness. All it takes is a lick of a postage stamp to let your imagination run wild; it's all set in a breathtaking and wildly immersive Pratchett-like world that feels very much like home.

The clock ticks as the action unfolds in a dramatic way that will keep the reader on their big POOKA toes. Overall, it is slightly bonkers, very clever and a fantastic book to read. It enables the reader to escape whilst riding the coattails of danger and adventure. Watch out for the creative use of naming the characters, which I found very amusing. This is a performance that surpasses all expectations by a very talented duo who have learned a thing or two from selling and reading books. Keep a watch out for the film - it should be good!

Anyone fancy a sandwich?