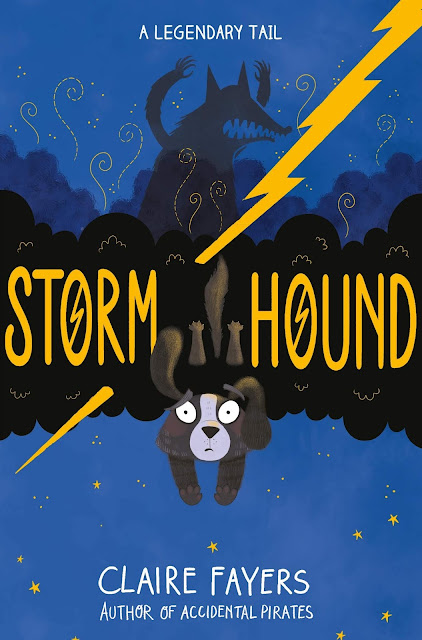 Storm of Odin is the youngest storm hound of the Wild Hunt that haunts lightning-filled skies. He has longed for the time when he will be able to join his brothers and sisters but on his very first hunt, he finds he can't keep up and falls to earth, landing on the A40 just outside Abergavenny.
Enter twelve-year-old Jessica Price, who finds and adopts a cute puppy from an animal rescue center. And suddenly, a number of strange people seem very interested in her and her new pet, Storm. People who seem to know a lot about magic . . .
In Claire Fayers' electrifying adventure Storm Hound, Jessica starts to see that there's something different about her beloved dog and will need to work out which of her new friends she can trust.

We are storming into the new year with another book review. This time it is for Storm Hound by Claire Fayers which will be published by Macmillan Children's Books on the 21st February 2019. It is certainly sporting an amazingly striking and eye-catching cover which has been designed by Becka Moor.

Contrary to my initial thoughts, I really enjoyed reading this book. My expectations were lifted after reading just a few pages as I soon became immersed in a mythical reality full of wit, charm and fantastic humour. This was not what I expected by reading, what I thought was, a rather underwhelming preface for this book. However, don't be fooled by this as it is a fantastic read.

You will meet my favourite character, Storm of Odin, as he falls out of the sky and finds himself a long way from the hunting pack. He is fantastically written with the most charismatic personality. He is a fierce little ball of mischevious fur, who is constantly frustrated and is really a rather unlikely hero. However, this makes the story all the more entertaining. Full of wild adventure, shape-shifting and some 'mild' magical moments (i.e. not overly used), this book will be loved by the younger audience (9-12).

The story features a displaced family, who are finding their feet in new surroundings, having moved from London to the more rural setting outside Abergavenny. This gives the story some substance and will be relatable to some readers, especially those starting a new school, making new friends and trying to fit in etc. It's an easy going read that has a moral at the heart of the adventure whilst still retaining a punchy plot.

The story is a rollercoaster of trouble, a dodgem ride of mystery and a big dipper of troublesome characters who all want to gain magical powers. It's a story based on myths and legends, but with a reality spin that makes it very intriguing. With so many twists, turns and possibilities, the reader hurtles through the pages on a funfair ride of despair and delight.

On finishing the book, your mood will be uplifted. This cleverly written heartfelt story will make you feel better about the world that you live in. What a great start to the year with a wonderful book to read.
Email Post
Labels: Adventure Book Review 2019 Claire Fayers Dogs Fantasy Feb 2019 Macmillan Children's Magic Middle Grade Children's Mythology Wales