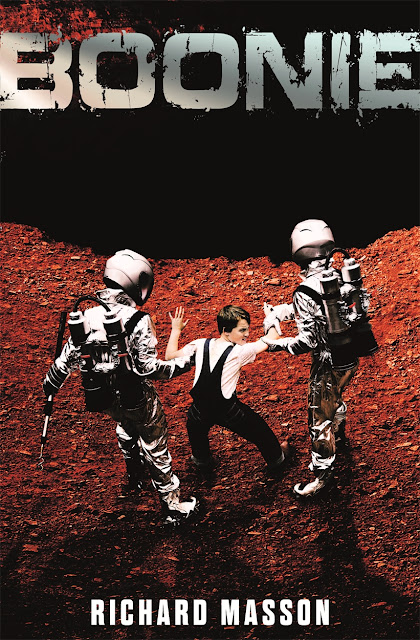 This is the second post in the guest blog series. This week I would like to welcome Richard Masson to my blog; he has written a post about his debut book 'Boonie'.  At the end of this post you will find an opportunity to win a rather rare and signed first edition book. It is published by Hot Key Books and looks rather wonderful.  If this post has interested and inspired you (which I'm sure it will), then visit Richard's site to enter the competition by following the link provided. Good luck to all of you who enter - we look forward to hearing from you.

What is Boonie?
Since I wrote Boonie, all sorts of people have given it so many different tags that even I sometimes wonder what sort of a book it really is. Essentially, it’s an adventure story, the story of a boy and a girl and their struggle to overcome the perils of the world they live in. It’s set on a planet scourged by war and pollution where water and getting enough of it is the main preoccupation.
Ah-ha!  you say, an environmental book, a warning to humanity. No, or probably not but if it strikes that chord with you, then that’s fine by me.

Dystopian then, like The Hunger Games? Well, no, not really that either .
Hot Key Books, the publishers have said it’s a book about friendship.  I liked that and certainly friendship and loyalty come into it but maybe, or then again, maybe not.
What I really like about these descriptions is that different readers seem to be getting different things out of Boonie.  I’m a writer who likes to lay down clues from which the reader can build their own world and gain their own understanding of my people and their motivations. OK, so I write the story but I like to put lots of different layers into it and, encouragingly, it seems readers are seeing through the layers, taking up the clues and  building their own worlds and having  their own light-bulb insights into the characters.

What is it then? What is Boonie all about?
Going back to the beginning, I still maintain that Boonie is an adventure story and if you want to read it as a straight forward yarn about two kids, getting through each day in an arid, desolate world and battling against some pretty nasty enemies in the hope of building a better life for themselves, then I’m happy. If you see an environmental warning in there or get an insight into friendship too, then great because what I’d really like is if everybody who reads Boonie thinks they have read a different book to everybody else, a book essentially their own, a book in which only they see the real story, only they really know JD and what he’s going through or understands that feisty little Aqua girl.
That would make me very happy.

Getting to the point at last, I wonder what you think? Obviously you can’t say until you’ve read Boonie and here’s how you can.

Boonie Book Giveaway.
Would you like a signed first edition hardback edition of Boonie?
Just visit my website at www.richardmasson.com where you will find the first 27 pages of the book. I’d love you to read it anyway but if you do just answer a simple question and leave a nice comment.  I promise I’ll read every entry and I’ll post the winner’s name on the website and tweet it too. All entries must be in by 31st March 2013 and must be from UK residents only. Good luck everybody.