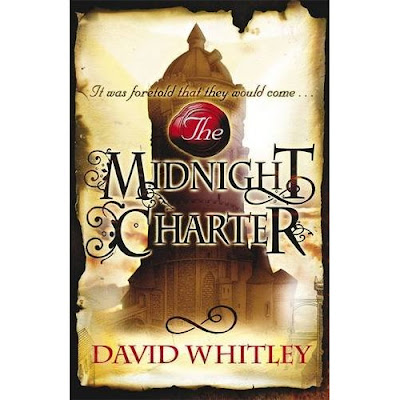 I have had lots of interest about this particular author and his debut book, so I have published anything and everything I could find on him and his great book.

David Whitley was born in 1984 and graduated from the University of Oxford with a double First in English Literature and a passion for writing children’s fiction.
At age 17 his first children’s novel was shortlisted for the Kathleen Fidler Award and at 20 he won the Cheshire Prize for Literature for a children’s short story, the youngest writer ever to win this prestigious award, presented by Michael Morpurgo.
TV quiz fans will have spotted David on BBC2’s University Challenge where he was a member of the winning Corpus Christi team who beat all comers to become Series Champions in 2005. With viewing figures of over 3 million per show, he still gets stopped in the street by people offering him a ‘starter for ten’!
High profile auctions took place across the globe for David Whitley’s dazzling novel, The Midnight Charter. Puffin’s Fiction Publisher, Sarah Hughes, secured UK and Commonwealth rights. Whilst dealing with power struggles, morality and corruption, The Midnight Charter, aimed at a ten plus readership, is also part conspiracy thriller, and part pure fantasy. It is a wonderfully compelling read which asks important questions about today’s society.

A NOVEL approach to literature has garnered a promising young writer a big book deal for his first work.

The debut novel of 24-year-old David Whitley, The Midnight Charter, will be published by Puffin Books this summer.

At 17, his first children’s novel was shortlisted for the Kathleen Fidler Award and at 20 he won the Cheshire Prize for Literature for a children’s short story – the youngest writer ever to win the award.

He began The Midnight Charter while reading English at Corpus Christi College, Oxford – and won University Challenge in the meantime.

In a similar vein to Philip Pullman’s Northern Lights trilogy, David’s novel tells a fantastical tale with a worldly message.

He said: “After I finished my course, my parents said they would support my plan to take a gap year and have a go at writing. Assuming nothing would come of it, I planned to go back to university and do a masters.”

But when now agent Charlie Viney expressed an interest in his style of writing, David’s work was sent to publishers worldwide. Even before it hits the shelves here, the book has been released in Germany – one of 18 countries and 12 languages the book will be released in.

He added: “It starts to feel normal then I think about things like that. It’s still a huge thrill.”

Part conspiracy thriller, part fantasy, The Midnight Charter is a children’s book dealing with morality, corruption and power. It is set in the fictional 18th century city of Agora where anything can be bought and sold and even children are possessions until their twelfth birthday.

David says encouragement at King’s provided the impetus to pursue his writing talent.

“Going to King’s sparked off the love of writing and reading,” he said.

“My English teacher Anne Marie McMahon was hugely encouraging, not only on the English front but she also directed me in Hamlet. I played Claudius so that was very useful for writing villains!

“She was always willing to help you beyond the normal lessons.”

The author says he would “leap at the opportunity” to see a movie made based on the book and the rights are currently in the hands of an intelectual property group in Hollywood.

David has already written the sequel – currently being sent to publishers – and plans a third.