Philip Reeve - No Such Thing As Dragons Book Review 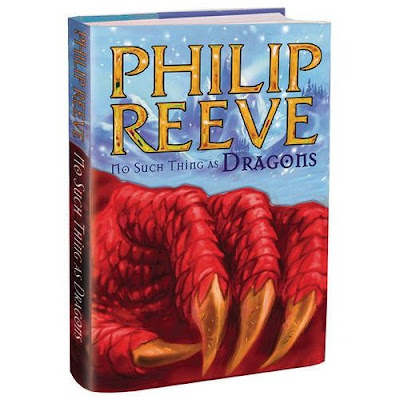 I am a really big fan of Philip Reeve's work. So the day I found out he had a new book coming out, I had to find out if I could get myself a pre-publication copy. I am rarely able to wait for books, so when my copy landed from the skies I was chuffed to bits and eager to read it.
This is a new tale from Philip which is told in a simple, traditional way which is both enjoyable and addictive. I literally could not put it down, until I'd read the whole book in one go (the best way to read a book in my opinion.)
This is a majestic tale of dragons, written with a different approach which is neither predictable or repetitive. The story starts when Ansel, a mute boy, is sold by his by his father to a heroic dragon slayer. They both set out to find and kill the mythical beast of a dragon, but is there really a dragon or is it all fantasy?
The book is a great read for all ages and one I would recommend to reluctant readers. I particularly appreciated the small sketches, incorporated into each chapter page, which give a visual depiction of the on-going story. This plot is simple yet descriptive, with an engaging and gripping adventure. The amazing fantasy transports the reader into the eyes of one of the characters used in the book. The ending takes on an unexpected twist which adds to the possibility of a sequel, I hope!! I give this book four out of five.

Ansel's new master slays dragons for a living. He says he's hunted the monstrous worms all over Christendom and has the scars to prove it. But is Brock just a clever trickster in shining armour? Ansel is sure there are no such things as dragons. So what is the man-eating creature that makes its lair in the crags of Dragon Mountain? Ansel and Brock must climb the ice face to discover the terrifying truth.