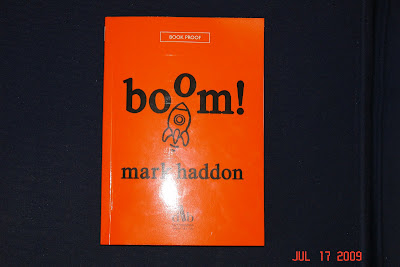 This book was originally published in 1992 under the great title Gridzbi Spudvetch! But Mark states that he thinks the title didn't entice sales, as no one knew how to pronounce it or had any idea as to the content of the book. As a result the book went out of print. However a call for it to be republished came and Mark has just rewritten the story; introducing it to a new audience and I'm really glad he did.
This is a great family read which will pull in all readers, of any age. It's a really fun adventure which involves a trip to another planet and back, as part of a galactic mission to save Planet Earth. The adventure starts when two school friends (Jimbo and Charlie) bug their teachers' staffroom to find out if Jimbo is going to be sent away to a Special School. But on listening to the overheard conversations of the teachers, they find two of the more 'quirky' teachers talking a strange language. Subsequently this sends them on a mission to find out the mystery behind them.

I found the mix of humour and descriptive language particularly enjoyable to read. The story flowed from page to page in this gravity-action madness. The narrative voice was well written and the on-going plot was not predictable. In fact it became a very addictive read; to the point of the pages being turned faster than a rocket setting off on a space mission to the moon!

This book adds another feather to Mark's cap as he has managed to write yet another good quality book, alongside his other published gems. This book gets a big four out of five as it is a great read for the younger person, we could do with more books as exciting as this one.

From the moment that Jim and his best friend Charlie bug the staff room and overhear two of their teachers speaking to each other in a secret language, they know there's an adventure on its way. But what does 'spudvetch' mean, and why do Mr Kidd's eyes flicker with fluorescent blue light when Charlie says it to him? Perhaps Kidd and Pearce are bank robbers talking in code. Perhaps they're spies. Perhaps they're aliens. Whatever they are, Jimbo and Charlie are determined to find out. There really is an adventure on its way. A nuclear-powered, one hundred-ton adventure with reclining seats and a buffet car. And as it gathers speed and begins to spin out of control, it can only end in one way ...with a BOOM. Note: This book was first published in 1992 under the title "Gridzbi Spudvetch!" It has now been completely re-written (Mark has changed pretty much every sentence one way or another) and given a new title that is much easier to pronounce.

Mark Haddon is an author, illustrator and screenwriter who has written fifteen books for children and won two BAFTAs. His bestselling novel, The Curious Incident of the Dog in the Night-time was published simultaneously by Jonathan Cape and David Fickling in 2003. It won seventeen literary prizes, including the Whitbread Award. Mark Haddon lives in Oxford.
By Mr Ripley's Enchanted Books on July 17, 2009

This Is a Very good book I am telling you right now to read it! It is a page turner, once you pick it up you cant put it back down.