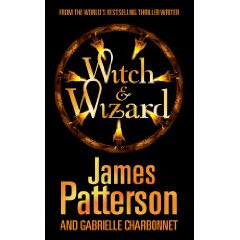 First things first, I'm not the biggest fan of James Patterson's work but I did like the look of this book. Once I'd started it, it read with an ease of simplicity, which surprised me. I felt it had the makings of a great storyline.
The two main characters, Wisty and Whit (slightly confusing!) are brother and sister. They are arrested on allegations of being a witch and a wizard. Life changes for them from this moment in time as they discover magical abilities which empower them.
The concept of the story is original (apart from the magical aspect - obviously) as it doesn't over dramatise the plots. The structure is tight and keeps the story focused. The portrayal of brotherly/sisterly love is poignantly written and again shows realistic empathy.
Subtle yet stark scenes adorn the structure. They graphically describe key actions but manage to keep the visual image fairly tame. A tricky aspect to juggle in order to keep the reader both informed yet engaged.
With the past and future all rolled into one - will the legend of prophecy show the way in book 2? Whatever challenges lie ahead within future writing, I look forward to viewing their development. I give this book four out of five due to the slightly confusing character names and slowish start.

The book is due to be published in the U.K. by Century on the 8th October 2009. The book review below has been taken from the U.S edition, which is published by Little Brown in December 2009. Just to let you know this information in case the editions differ in anyway, as I've written my review based on the US edition for children.
(Ages 9-12 based on the U.S edition.)

The world is changing - the government has seized control of every aspect of society, and now kids are disappearing. For fifteen-year-old Wisty and her older brother Whit, life turns upside-down when they are hauled out of bed one night, separated from their parents, and thrown into a secret compound for no reason they can comprehend. The new government is clearly trying to suppress Life, Liberty, and the Pursuit of Being a Normal Teenager. Imprisoned together and condemned to death, Wisty and Whit begin exhibiting strange abilities and powers they never dreamed of. Maybe there is a reason they were singled out. Can this newly discovered witch and a wizard master their skills in time to save themselves, their parents - and maybe the world?

JAMES PATTERSON is one of the best-known and biggest-selling writers of all time. He is the author of some of the most popular series of the past decade: the Women's Murder Club, the Alex Cross novels and Maximum Ride, and he has written many other number one bestsellers including romance novels and stand-alone thrillers. He lives in Florida with his wife and son. James is passionate about encouraging both adults and children alike to read. This has led to him forming a partnership with the National Literacy Trust, an independent, UK-based charity that changes lives through literacy.
By Mr Ripley's Enchanted Books on July 02, 2009