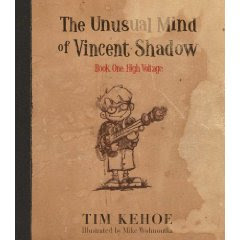 I really liked the look of this book. I actually took it to work to read and some of my staff wanted to read it after me, which is something. It's a super cool book with a quirky style sketch on the front and even more super sketches, in the section marked this notebook belongs to: Vincent Shadow, showing all his mad toy inventions. I loved the simple story which had all the imagination of the 'great' Roald Dahl. It's about a boy extraordinaire, who has the creative mind of a genius misunderstood. When his dad re-marries (after his mum dies) he finds himself with three stepsisters and a stepmum, who is not the warmest person towards Vincent. So he finds himself leaving New York, his secret toy laboratory and his inventing days all behind him.
This is a good, refreshing story which leaves a great taste for the reader. I did find some characteristics similar to the Blue Balliett books. This book is aimed at 8-12 year olds but will appeal to everyone.
I give this book four out of five, only on the account that I wanted so many more pages to read. I am definitely looking forward to reading the next episode.

Book published By Little Brown and Company in November 2009 (U.S only)

Eleven-year-old Vincent Shadow dreamed of being a toy inventor. He had notebooks full of ideas bubbles that carried sound, rockets that pop into kites, and a football that would rather bite than be caught.
Unfortunately, the secret attic lab where Vincent built his prototypes had seen more disasters than triumphs. But a chance encounter with eccentric toy inventor Howard G. Whiz, and the discovery of long-lost inventions by one of the world s greatest scientists would change Vincent s life forever.

Written by award-winning toy inventor Tim Kehoe, The Unusual Mind of Vincent Shadow is sure to delight young readers and send their imaginations soaring!