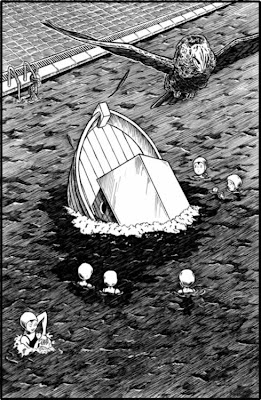 Book Synopsis (This is not suitable for Children)

As the ragged stranger shuffled into the police station in the small coastal town under cover of darkness, no-one noticed him. Announcing his arrival to the two decadent local lawmen, the visitor claimed to possess details of a mythical Scottish village so notorious and terrifying that even the name had long since fallen from use... But now it had returned. Strathcarnage was alive.

The stranger not only claimed to know where the lost village lay hidden. He had already popped in for a visit.

And he had carried back with him the astonishing and hideous tales to prove it. Would these accounts be enough to persuade his sceptical audience? Could he be trusted? Could any of those present resist the possibility of the ancient town of legend really existing? What tragedy had this man witnessed and what deeply personal mysteries could his information perhaps solve?

Dare you join him as he reveals all, laying bare the twisted secrets at the dark heart of the myth?

Heads up for the novel ‘Strathcarnage’ that is due to be released on the 22nd of July 2009. The debut novel by Scottish author Matt Hamilton concerns tales from a debauched hidden town beneath the Scottish cliffs, having been founded by shipwrecked lunatics generations before. Chris Odgers has provided 19 black and white chapter illustrations to accompany the 305p, hard backed novel.
More information and updates can be found at the author website: www.strathcarnage.com and a few more images at our Sawhorse Books site: www.sawhorse.co.uk
Originally intended to be released by Sawhorse Books, the logistics of publishing a novel we’re a little much for our picture book company, so Matt found a home at Matador, where the book is also available, as well as through amazon, and other online booksellers. Also good high street book shops, if you are in the UK.

I will be also auctioning off the artwork from the book in the very near future for those who wish to own an original documented piece from the town. News on the next Sawhorse picture book release will be updated with images on the sawhorse site very soon…

That’s all for now, thank you for your time and hope this mail finds you well.

Matt Hamilton was born in Glasgow in 1969.

After various amusing interludes as a plant labourer, a shop warehouseman and a dishwasher in a Mexican restaurant, he escaped to Glasgow University where he studied Mexican politics, Marxist feminism and the post-modern philosophical impact of the subsidised university canteen all day breakfast.

On being offered a Masters degree as a clear enticement to leave, he later returned to the University undercover to both excite and alarm the other members of a creative writing course, before returning into hiding to devote himself full time to the creation of Strathcarnage.


He now lives a monastic existence in Falkirk, within sight of a colossal chemical plant, the billowing fumes from which may be partly to blame for the twisted imagination you shall soon find yourself at the mercy of, and hopefully highly amused by.

Strathcarnage is his first novel, and the first in a series set in the twisted mythical village.

Matt is currently at work on the next installment in the series and on a related book of Strathcarnage verse.
By Mr Ripley's Enchanted Books on July 21, 2009

Thanks for turning me on to this, I think it was the "Not Suitable For Children" tag that grabbed my attention. A mighty fine and dark comedy novel that reminded me of early Terry Pratchett but much sicker and as a result, much funnier. Really enjoyed this and was glad to read there is going to be a sequel.

Search this out, it's the funniest book I've read this year.