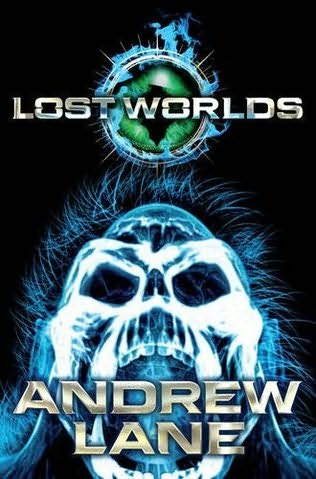 Arthur Conan Doyle has been a great influence on many writers both past and present, but none more so than on Andrew Lane, who was greatly inspired to write his first series for children entitled "Young Sherlock Holmes". This has now been published in thirty seven different languages - highlighting the ever increasing popularity of the series with over 200,000 copies having been sold so far. Book six, "Knife Edge", is due to be published in the UK in September, so it is certainly not the end of this brilliant series.

Andrew has kept the Conan Doyle connection alive in spirit through his new epic adventure series. The main character in the book, Calum Challenger, is the grandson of Doyle's protagonist, Professor George Edward Challenger. He is featured in a similarly titled book 'The Lost World' hence a new name is born. It is certainly a fantastic opening book which I'm sure you will all be eager to read - just like I was.
Calum's character is very stereotypical in many ways apart from the fact that he is paralysed. The author portrays Calum in a rather unique and endearing way as a teenage boy coping with a disability. Whilst this is featured as only a small part of the story, it certainly added an unexpected outlook. Calum Challenger is on a quest to find a cure to help him walk again and to live a normal life. His mission is to track down the supposedly mythological creatures that are so rare, that most people don't believe that they even exist. However Calum does. It is imperative that he finds them for two reasons: to take their DNA to use it to help protect these species and also to search for a cure for his paralysis. The only problem is that he's confined to the high-tech virtual world where he lives on his own in a converted warehouse.
As the story unfolds, the solution literally falls from the sky as Calum finds an unlikely team of friends. He finds some by luck and others by circumstance. There is a goth computer hacker, a freerunner, an ex-marine and a girl with a chip on her shoulder. Together they set off on an expedition to the Caucasus Mountains in search of a mysterious creature, which has supposedly been sited. However, when a pharmaceutical corporation called Nemor have conflicting interests, the team find themselves both under pressure and in danger. Can they locate the mysterious creature first and stay one step ahead of their enemy.

This is a fast-paced, high-tech story full of great characters that teenagers will easily engage with and relate to. Gecko was easily my favourite character in the book. He certainly brought a new dimension to the story with his free running - this is a really cool sport to watch if you ever get the chance to do so.
In my head, I was confidently certain that I knew how this story would end. Surprisingly, it took a very different route. A turn of events proved to be very unpredictable and kept me guessing right up until the very end.

I found this a very refreshing story to read. Both the ideas and the creativity transpose well into the story. They keep the reader hooked in a fantastic bubble of action and plot line. The literary influence of Willard Price, in my opinion, helped to lead the author to deliver a slice of both factual and historical writing which again made the story shine out proud like a host of golden daffodils.
I absolutely loved this book - it is a brilliant and enjoyable read. Full of old-style action, within a hi-tech world, it is hair raising (just like the cover!) You can check this out with the free app that you can download. This book has easily sky rocketed to being my favourite book of the year so far. It is an amazing start to a fantastic new series......... I'm lost now for any further words!

An extract of the first chapter, will be also be available to read later this week. Thanks for reading all.
Published by Macmillan Children's Books; 25 April 2013
By Mr Ripley's Enchanted Books on April 15, 2013