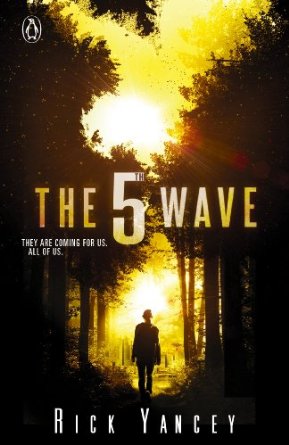 The 1st Wave: a power cut and the world is in complete darkness
The 2nd Wave: a tidal wave wipes out three billion people and only the lucky escape
The 3rd Wave: a deadly virus clears a further four billion - only the unlucky survive
The 4th Wave: the few remaining survivors begin killing each other. Only one rule applies: trust no one
The 5th Wave: No one knows. But it is coming......

With the hype mounting and the movie rights already sold, will this book deliver a Hollywood blockbuster? Riding on the success of 'The Hunger Games' and 'I Am Number Four' this genre is really hot at the moment and this book is definitely seeking a slice of the action. Rick Yancey's terrifying dystopian vision is a great story. It is one that I feel people will love and say great things about. Even though I actually had a couple of issues with the book, but I will say more about this soon.

The start of the book felt a little bit slow going to me, although I was still able to really enjoy what I was reading. The story has all of the key ingredients that I love to read about. A dystopian setting and a terrifying alien invasion with a sting in its tale. All of this is set in a well-written and well imagined sci-fi setting which has a bleak outlook and an even bleaker future. It's scary, it's violent and it's psychologically gripping - this story is brilliant. It is full of originality and full of big time heroics as the characters fight for survival - the underlying theme in this story is what it means to be human.

However, at this point, the plot then came crashing down for me. The middle part of the story just stopped and I found myself wading deeper and deeper into the character emotions and feelings of Cassie. These ran strongly between trust and despair, defiance and surrender and between life and death etc. It was far too deep for me and became rather annoying. It felt as if the story was only based around two or three characters in the book, but it really could have been so much more than that. In my opinion, this section really just took the fantastic edge of a great story.

The book did recover towards the end. All of the story segments were expertly woven together to make it a particularly intense and epic ending. It is an action-packed story which is full of great ideas. However these are wrapped up in with some rather big surprises. I was definitely superglued to the final outcome, which made the whole reading experience enjoyable and captivating. This was the ending that I was hoping for - the author delivered this in a really big way. It is an outstanding finish which, in my opinion, made up for the middle section.

This book is the first part of a trilogy. It is a story, in my opinion, which should work well as a movie. The book is due to be published on the 7th of May by Puffin. With a UK author tour confirmed in early June, this is definitely an opportunity worth looking out for. I look forward to your comments, as always.
Here is the book trailer....