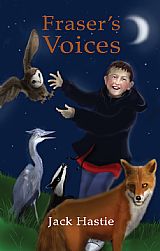 On receiving this book, courtesy of the publisher - Matador Publishing, I made a couple of snap judgments based on the appearance of the book and also the synopsis. Initially it appeared as if the book might be a little bit exaggerated due to both the book cover and also the discovery that the main character is able to speak to animals. Both of these aspects didn't really sit comfortably with me. In fact at some point in the past this would have really put me off reading the book. However, knowing the track record of books that have been published by this company, I was more than prepared to give this book a chance and . . . . I'm so glad that I did.

This story is beautifully written. Set in Argyll, the West Highlands of Scotland, Fraser tells the story of a ten year old boy who sudenly discovers that he can speak to animals. This gift is associated with a rare and mysterious illness known as "Tumblings of the Mind". However, once in remission, then this unusual ability fades.

The onset of Fraser's recurring illness and some of the tragic events that unfold are immensely tough on the heart strings. One moment the story is full of happiness; the next it's full of sadness. It's a natural roller-coaster of rural life which is depicted brilliantly. I really enjoyed the dialogue between Fraser and the animals - this was particularly engrossing and also educational. Full of factual information, it will definitely have you hooked.

Delivered in five short sections, each section is part of a bigger tale, all breathtaking and gripping to read. The author's understanding of animals, the countryside and the natural surroundings of the Scottish Highlands is stunning. It really makes this book for me - I felt like I was back on the Isle of Mull re-living my holiday. I certainly felt like I was able to visualise the adventure being played out in front of my eyes . . . I could almost touch it with my bare hands. One-eyed fox, Nephesh the owl and Barook the badger are literally the stars of the show and help Fraser to solve some rather puzzling mysteries in a unique and special way.

The author aimed to be true to the psychology of the animals, which he has achieved. He has also achieved a very engaging story which is original and not at all cliched. He has managed to set a magical fantasy world in the Scottish Highlands - this is a very exciting and interesting prospect for readers of all ages from 10+. This is a particularly memorable and touching traditionally told tale. I have no hesitation in awarding this book full marks - I'm so glad that I was not influenced by my initial thoughts.