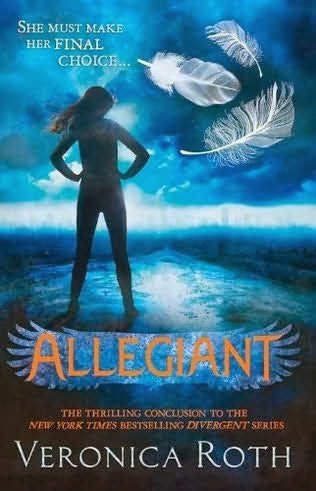 * This Book Review contains spoilers for the first two books in the series as it's the final book in the trilogy.

I was both excited and terrified about going into this book. I loved Divergent, and whilst Insurgent wasn't quite up there with it, the ending had left me on tenterhooks dying to find out what was going to happen next. I was really lucky to get to read this book so soon after release, because I know spoilers have been flooding the internet! Luckily I managed to avoid them and I'm keeping this review spoiler free as well.

My connection with Allegiant was instant. I loved falling back into the writing which was tense and gripping throughout. This book is told from dual POV, alternating between Tris and Four. I thought this worked really well for a few reasons. At the beginning, I think it helped give a real insight into the relationship between Four and his parents which was important to the plot. Without Four's insight, I think that element of the story would have been really lacking. Secondly, it helped cement my love of Four. I've always liked him, but maybe not quite on the same level as others have. In Allegiant I was able to really connect with him as a character and feel for him that bit more during what he goes through. There is a lot of inner turmoil he puts himself through as certain things come to light and he questions himself and his identity. It was really interesting to see how he reacts to those moments, and how that balances out with Tris' reactions.

As the final book in a trilogy, I was expecting Allegiant to answer questions that the previous two books had posed. It certainly did that. Finding out the bigger picture was something I was hoping for going into the book, and I wasn't disappointed. There is a lot of discovery about the wider world which was something I was curious about. I loved being able to appreciate the world Roth has come up with more fully as well as seeing how the characters react in an environment they aren't used to. There's also a chance to visit more of the characters' pasts which was something I enjoyed, as well as an exploration of the factions and their origins.

One of my favourite things about Allegiant, and why I thought it worked so well as a final book in a trilogy, was the way it reflected back on the previous two books. The characters are always reminiscing on their past experiences which made me all nostalgic. I loved reflecting on those moments from the first two books and reliving those scenes. It sounds incredibly cheesy, but it was like remembering a treasured moment with friends, not just characters. I think fans of the series will really appreciate those little touches. I certainly didn't expect to get so sentimental and the fact it made me feel this way has made Allegiant my favourite book in the trilogy. It also helped add to the suspense because the characters are reflecting on their pasts to help them make important decisions about their future, when the whole time you know the book is steadily drawing to a close.

I thought the relationship between Four and Tris was a real strength of the book. I adored their stolen moments together because it provided that touch of normality in this ever increasing craziness that surrounds them. Seeing them together just allowed you to escape from this chaotic environment they find themselves in and reminded you of what is important during troubled times, and provided a great contrast with the other events happening throughout the book. Like with Insurgent, things don't always go smoothly between them, which is understandable with what they're up against and I liked that added tension and intensity between them.

Throughout the book, the characters are constantly challenged and there was a lot of focus on trust and betrayal, friendship and family, love and sacrifice and the fight to protect each other. I loved how all these themes came together and seeing how each of the characters adapted and dealt with situations in their own unique and different ways.

I'm trying to avoid discussing too much of the plot in this review, because I don't want to spoil anything about the book for anyone, and so this review is purely my personal reactions to the story. I found it to be incredibly moving, a lot more so than I was expecting. There were some really emotional scenes that just blew me away and broke my heart as well as some incredible plot twists. All the way through I was trying to second guess what would happen, and none of my predictions came true. Everything that happened was always a shock or surprise keeping me hooked to the pages and lifting my jaw from the floor! I thought the ending of the book was incredibly well done, and I closed Allegiant feeling satisfied that the trilogy and the characters had been done justice.

Thanks for reading...
Posted by Mr Ripley's Enchanted Books on November 10, 2013