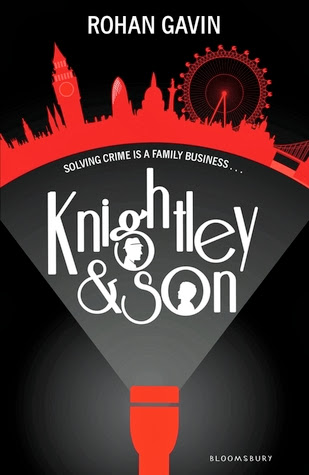 Bloomsbury has acquired a “darkly comic detective series” called Knightley & Son, which has been written by the screenwriter Rohan Gavin. This debut release will be out next year - 2nd January 2014. What makes this book particularly interesting to me is the authors aim. He mixes many genres and concepts into this book - fantasy, suspense, comedy and mystery. These are all of the things that excited the author as a child, but also older readers like me. I have to say that, in my opinion, this book surpasses all expectations. It was such an enjoyable and interesting read - I was very pleasantly surprised. I believe that this book should and, probably will do very really well.
Any fan of Sherlock Holmes will find this book very appealing. It is a very fast paced exploration into the detective world where you are introduced to Alan Knightley and his son, Darkus - two great detectives for the price of one. If the crime is too strange for Scotland Yard to handle then Alan Knightley is the man usually to solve it. Unfortunately he has recently fallen into a mysterious coma. However Darkus is determined to follow in his father's footsteps and find out what has really happened.
It comes as a great surprise when Alan Knightley suddenly wakes up, but his memory is rather vague and he needs help to piece the events together. Fortunately Darkus is on hand to support him and the partnership suddenly springs into life for Knightley & Son with a mystery that gets stranger by the minute.
I don't want to spoil your reading pleasure so I'm not going to divulge any more information about the plot. However the characters, in this action packed tale, are a mixed bunch; they are very interesting but not at all representative of your stereotypical/average characters that you would normally find in this type of story. Interestingly, Alan and Darkus are not the only characters who are able to, and are good at, working things out in this adventure. A number of secondary characters are also able to deliver a lot of punch and mystery within the story.

This book really hooked me in - I read it in one sitting. It had lots of wonderful ideas that worked particularly well, and had a slightly different feel to what I was expecting. My only small gripe was that I was hoping for a twist at some point in the story, but I never found it. However this didn't detract from the story itself which comprises of dark and sinister moments to keep you on the edge of your seat. It delivers great moments of comedy laughter that will have you chuckling to yourself, but it also incorporates the very heartwarming relationship between father and son.

This book is full of suspense, mystery and some very clever detective skills. All of which will appeal to any fantasy lovers at any reading level. It is a very good build-up to a potentially fantastic series.
Mystery awaits and after all, how much power can one book have? Jump into the action and find out.....
By Mr Ripley's Enchanted Books on November 15, 2013