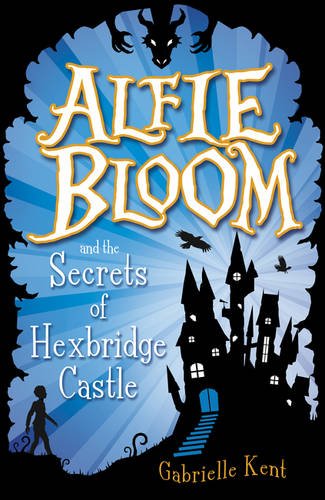 Welcome all. Today, I am very lucky to be interviewing Gabrielle Kent, author of Alfie Bloom and the Secrets of Hexbridge Castle. This book has already been published by Scholastic Press on the 4th June 2015. I'd like to thank Gabrielle for agreeing to this interview as I have heard so many good things about Alfie Bloom. One review that I read described it as having 'lovely Potter-esque touches'. It sounds like my kind of read so I've added it to my reading list ...

I hope that this interview inspires you to read Alfie on his first outing, I think it should.
How would you describe your debut book Alfie Bloom and the Secrets of Hexbridge Castle to potential readers?
The book falls into the category of magical realism, which is the area that has always interested me most as a reader. I love to imagine that magical happenings are possible in our world. The story is about a young boy who inherits a castle full of wonders that has been sealed for centuries. The age range is middle grade, but I like to think that it would appeal to anyone with a love of magic and mystery.

Give us an insight into the main character. What does he do that is so special?
Alfie soon discovers that he was born in the very castle he inherits, but over six hundred years ago during a magical timeslip. There, Orin Hopcraft, the last of the great druids, hid an ancient magic inside him which others seek, but which should never be used. Alfie must learn to control the magic inside him, as well as protecting a dark secret hidden deep below the castle. Orin Hopcraft has also left Alfie a talisman with a magical lens which allows him to unlock some of the secrets of Hexbridge Castle. Apart from that, he’s a perfectly ordinary boy.
I love red hair, I have dyed mine copper since I was sixteen. There are no books I can think of with a redheaded boy as a main character and I wanted to share my love of this hair colour.

As a game development lecturer, has this role influenced any part of the story?
As a game developer I can’t help seeing my writing through those eyes. While I was writing I was imagining how the castle would work as game levels and what mysteries and puzzles players would solve. I even had ideas for potion mixing and hidden object games. Several students of mine worked on a lovely little game based on the book. Alfie falls asleep in his library and his talisman is stolen by books that have come to life. It will be up my site or Scholastic’s own soon, I’d love to know what people think.

Through organising the Animex festival I have a good insight into the worlds of animation and visual effects. While I was writing I felt as though I had a film camera on my shoulder. I was imagining how certain scenes would be shot, and even how the VFX could be achieved. The big showdown and the scene on the barn roof are my favourite visual scenes.

Are there any particular authors that have influenced your writing?
Too many to mention, but Enid Blyton and Roald Dahl always had a special place in my heart as a child, and I was surprised at how much of an influence they seemed to have on me as was writing.
I adore the work of Neil Gaiman and particularly Terry Pratchett. I would love to be able to write like them, but I think that I am starting to evolve my own style and I’m excited to see how it develops.

Did anything surprise you during the writing process?
While writing can be a really hard slog at times, it’s interesting to see how your brain sometimes throws you solutions to problems that really surprise you. It’s like having a little helper on your shoulder. I was amazed at some of the clever little ideas it gave me, they really felt as though they were coming from a different person.

The biggest surprise was when I decided to change Alfie’s best mate from a boy called Danny Chapman into a girl called Amy Siu. I pinched the name Siu from a friend and suddenly realised that she had gone from a Caucasian boy to a mixed race girl. And it changed hardly anything in the story! I’d recommend everyone try flipping the gender of their characters, it really challenges your preconceptions. I even left Madeleine’s little crush on Danny in there. It became a bit of a girl crush she has on Amy, she really wants to be just like her. And who wouldn’t?

What do you think makes a good story?
I like stories that don’t answer all of the questions they raise and leave you wondering about characters and hints long after you have read the book. There are a few mysteries in the Secrets of Hexbridge Castle that are not answered just yet, and I love hearing people’s theories on what they think will happen. I think folks will be surprised, particularly by Ashford’s big secret, which is answered in book two! I have also planted a few seeds that probably won’t be spotted just yet, but they will definitely grow.

Are you currently involved in any writing projects that you can tell us about?
I have just finished book two in the Alfie Bloom series and am now at the planning stage for book three. When I thought Alfie might not make it to print, I started work on another project about a Mauritian girl who goes on a very strange journey. Her name is Ashwina Flynn and I hope to finish her story at some point. I also have an idea for a book for adults that is knocking on my skull, trying to get out. I really love the idea and will definitely let it out at some point, perhaps even as a short story.

Can you pass on any tips regarding the writing process to other budding writers?
Structure your book before you even start to write! When I started writing this book I had so many ideas and tried to cram everything in with only a rough idea of where the story was going. As a result it took me years to edit it into something publishable. I had some great scenes in there, but some of them just didn’t advance the plot in any way. With book two I sat down and typed up a rough summary of each chapter. Of course some of these things changed once I started writing, but it was so much easier to have the skeleton of my book sitting in front of me.

I would also tell first time writers DO NOT EDIT AS YOU WRITE! It wastes so much time. Just trust your future self to pick up errors and issues and correct them later. With book two I left myself lots of little notes such as ‘make this bit less rubbish’ and ‘more drama in this scene’.
My husband, Satish, did something very cool with an excel spreadsheet. He rated all of my chapters out of 10 for interest, intrigue and drama, then turned the figures into a graph. It was amazing to see as it highlighted the fact that the book flatlined for a little while after chapter three. Many agents and publishers had loved my writing, but had lost interest after three chapters. Now I knew why! After a couple of drastic cuts, the first publisher to see it snapped it up!

Do you think that the book cover plays an important part in the buying process?
I think it does. I started reading Terry Pratchett because of the amazing covers by Josh Kirby - I kept reading them because of the
brilliant writing. I wasn’t too sure about the suitability of the cover for Alfie Bloom when I first saw it, but the reaction from children has been amazing, they really seem to love it. It taught me to always trust my publisher’s marketing decisions!

What are your thoughts about how to encourage more children to read?
I know a lot of children who have started reading after discovering books based on their favourite games, such as Minecraft. Storytelling in games is getting much better and now spins off into tie-in books and comics. These are a great way to encourage children to discover the joy of reading. I’ve seen children read these and then discover that they want to read books of different genres.

What do you like to do when you're not writing?
Reading, making art, playing computer games, and visiting castles! I have so many castles left to visit. I’d love to explore some of the wonderful ones over in Germany.

As writing is the job I do in my spare time, much of the rest of my life is taken up with the day job, teaching computer games development to university students, and organising Animex, an international festival of computer games and animation. I love teaching, working in the games industry and writing, so I count myself very lucky that I get to do all three.
By Mr Ripley's Enchanted Books on June 15, 2015