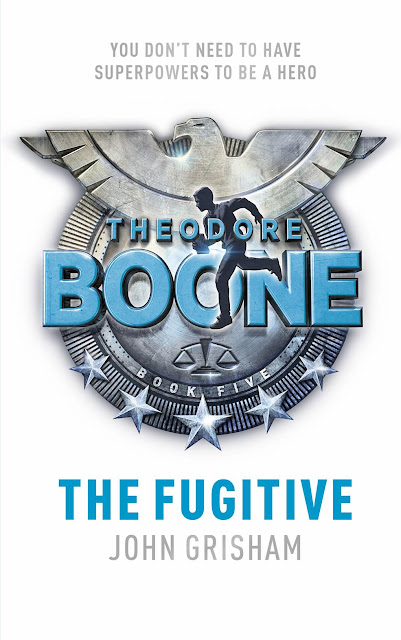 We are hurtling at full speed with book five in the Theodore Boone series; the latest book is called The Fugitive. The whole series has steadily turned into one of my personal favourites. All of the books have been gripping, enjoyable and unputdownable.

John Grisham, a former lawyer, initially turned his hand to writing adult legal thrillers. He has had great success with over 275 million books sold worldwide and nine novels adapted to become major films. Quite clearly he is a recognisable and well loved household name. More recently he has been inspired by his daughter Shea, a teacher in North Carolina, to write the Theodore Bone series for a younger audience - perhaps even his daughter's class!

The words on the front cover state that "you don't need to have superpowers to be a hero" and, in this book, you really don't. Instead, all you need is down-to-earth Theodore Boone, who is a teenage lawyer and a courtroom hero. In this book, Theo embarks on a school trip to Washington to see the sights and attractions. No danger there then you would think, but don't be easily fooled!

Theodore soon finds himself embarking on an adventure full of danger and intrigue after meeting the most wanted man in the history of his home town (Strattenberg). He soon becomes caught in the hunt for an accused murderer, alongside the talented and professional FBI. Pete Duffy (major criminal) finds himself back in court, which creates some nail biting tension, whilst Theo plays detective and lawyer with his Uncle Ike. This part of the plot delivers an action adventure written in a classic, but simplistic style with just enough detail and dialogue to keep the reader hooked.

What really lifts this book, and the series, is the insight that we receive into the legal system. The courtroom drama, which is played out dramatically and with intelligence, feels very realistic to me. It gives the narrative authenticity which is really down to the author's extensive knowledge. It's very interesting to read from this perspective and creates originality within this genre.

The only potential drawback to this book is the length; it is very short on content and contains little backstory for any reader not familiar with the series. In my opinion, to really enjoy this book in its entirety, I would recommend reading the previous book "The Activist" or starting with the first book in the series. Nevertheless, this is a great book to get young people engaged in reading and to inspire them in becoming a lawyer.

The Fugitive is a great topical book that can be discussed as a class or as a book group. As part of my book, which looks stunning with eye-catching blue endpapers, I had three discussion topics to consider, but these could easily be debated with students and friends. There is also an interrogation challenge to test your keen eye for detail and a quick Q&A session to keep you further entertained.

This is a great detective mystery that dances to the song of the legal system. It is an adventure that will lead you down the path of justice, or perhaps NOT! Will the criminal allies be out for revenge . . . . . . ?

This is a series that I would have loved to have had the opportunity to read as a child. I will certainly be watching out for the next crazy case!