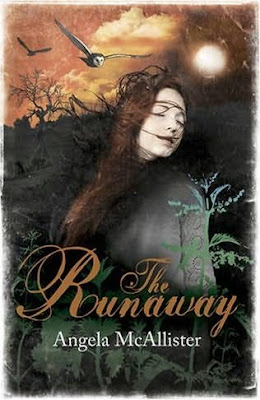 I have to say I really enjoyed reading this book, I only read it by chance. Which is sometimes the best way to begin with a book, as no preconceptions are gathered about what is to be found.
It's a great combination of styles. A hint of David Almond in the dark detail and a touch of Marcus Sedgwick for the story plot. The main character Megan is running away from everything she knows. She finds herself in a derelict house which has more then a story to tell. Lurking in the dark it has many untold secrets and lots of questions that Megan wants to find the answers to. Angela draws upon the human emotions to carry along this great read. When Megan finds an old blind lady living there, the story then really starts to weave its magic through to the heart. The story was so well told that I almost believed it could be true.
I don't want to give too much away as I heartily recommend it to read. My only fault with great reads like this is that the book comes to a close after 192 pages, and I wanted more... so I will only give it Four out Of Five. I know what you're thinking!

After the death of her young brother, Megan runs away. She has always had the power to heal - but not when it came to him. And now she punishes herself - pulling handful after handful of nettles from the hedgerows, so she feels pain, seeing always, at the corner of her vision, a pale winged boy. His wings are broken. Eventually she arrives at what she believes to be a deserted, burned out house in the village of Morne. But part of the mansion is occupied by a blind woman, whose companions are two owls. She tells Megan, who is terrified of birds, they are her eyes. They will see everything she does. Theirs is a strange relationship - the woman is bitter, she has a secret to hide, but then so does Megan. Gradually they come to depend on each other, until the arrival of Tom. Megan is keen for company her own age and his friendship, but she doesn't know that he knows Marguerite's secret and is determined to reveal it and destroy her in the process. Set in C19th, with richly drawn characters and a well plotted story, Angela McAllister's second novel explores the frailties of human emotions, but is ultimately about healing rifts and friendship.

Angela is more well Know in her work with picture books having done over forty four picture books since 1988.
Angela McAllister has written over thirty children's books. She lives in Hampshire with her husband and their two children, who are often the inspiration for her stories.
By Mr Ripley's Enchanted Books on April 12, 2009